Over the holiday season we’ll be republishing a series of Nintendo Life articles, interviews and other features from the previous twelve months that we consider to be our Best of 2020. Hopefully, this will give you a chance to catch up on pieces you missed, or simply enjoy looking back on a year which did have some highlights — honest!

This feature was originally published in July 2020.

This week sees the release of Paper Mario: The Origami King, the sixth game in the Paper Mario series and the first to arrive on Switch. As our review explains, it’s a thoroughly entertaining entry and one that’s well worth playing, even if the combat system is a bit questionable. The paper-like protagonist has mainly appeared in his own games, but did make a major appearance in Mario & Luigi: Paper Jam as his own distinct entity. Does this mean Paper Mario and Mario are technically different people? You’ll have to ask Nintendo.

Since we’re the nostalgic type here at Nintendo Life, this feels like the perfect time to take a look back at the Paper Mario series as a whole, in order to see how far the franchise has progressed. We suppose you could say that we’re going to go ‘flat out’ in exploring the series history, but we wouldn’t say that. We’re above jokes like that.

It’s claimed that Paper Mario was originally supposed to be called Super Mario RPG 2 and be released on the Nintendo 64DD add-on. Instead, it developed its own identity and made it to standard N64 consoles, which is probably for the best because we never got the 64DD in the west and would have therefore missed out on this little beauty as a result.

You can thank the game’s art director Naohiko Aoyama for Paper Mario’s unique design: making Mario and chums flat, paper characters was a stroke of genius that worked so well it remained in place for the entirety of the series. It wouldn’t be called Paper Mario otherwise, we suppose. Mind you, it was named Mario Story in Japan so that throws things off a bit.

This first game has Mario attending a party at Peach’s Castle; Bowser arrives with a non-Kirby-related Star Rod (which makes him invincible), punts Mario out of the castle and lifts the entire castle into the sky, essentially capturing not only Peach but her home as well. It’s up to Mario to find the seven Star Spirits, who’ve been trapped in playing cards by Bowser. Once he gets them, he’ll be able to cancel out the powers of the Star Rod and give Bowser a ruddy good kicking.

The most memorable thing about the first Paper Mario (other than the art style, obviously) is the addition of eight partner characters, whom Mario befriends on his quest. These are essentially nice versions of Mushroom Kingdom enemies and include one of the greatest supporting characters of all time, the wonderful Goombario (a young Goomba who’s Mario’s biggest fan). 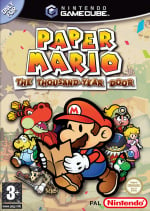 For many, the second Paper Mario game marked the series’ high point, and everything that’s been released since has been little more than a fruitless attempt to surpass the unsurpassable. But, um, don’t let us bring the mood down or anything. Let’s just focus on the positives, eh?

The Thousand-Year Door is the first game in the series to have Mario fighting against a different antagonist rather than Bowser, a trend that would continue for most of the sequels. This time the bad guy in question is Sir Grodus, the leader of a group of cybernetic soldiers called the X-Nauts. Naturally, they’ve kidnapped Peach, but the matter is a little more complicated this time thanks to the titular Thousand-Year Door.

This is a fabled portal in the town of Rogueport that’s said to grant huge fortune, and Sir Grodus is looking for the seven Crystal Stars that will help him open it. Mario, not realising Peach has been kidnapped, thinks she’s looking for the Crystal Stars too so he heads out to look for them, under the impression he’s helping her out. The whole thing’s a bit of a complicated soap opera, really.

The game was praised for practically every element of its design, from its turn-based RPG combat system to its fantastic dialogue and, once again, its superb cast of supporting characters; not least of all its seven new partner characters, from archaeology student Goombella to the bizarre wind spirit Madame Flurrie.

By this stage Nintendo seemed to have realised that Paper Mario was going to be a series rather than a one-off, and so the naming scheme in Japan was changed to match the west. Although the N64 original was called Mario Story, this sequel was instead named Paper Mario RPG, making Paper Mario the official series name in all major regions. 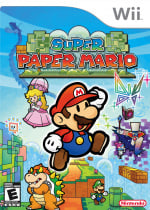 We all know that Super Mario Galaxy was one of the Wii’s first big hits, but many people forget that it wasn’t actually the first Mario game on the system. That honour went to Super Paper Mario, which launched in April 2007 in North America, but us sad Europeans wouldn’t get it for another five months. The reason it arrived so early into the Wii’s life is simple: Super Paper Mario was originally going to be a GameCube game but was moved to Nintendo’s new system to build up its library during its launch year.

This time the main enemy is Count Bleck, an evil geezer who kidnaps Peach, Luigi and Bowser and plans to force Peach and Bowser to marry. This in turn will summon the Chaos Heart which he can use to destroy not only the world but every dimension in existence. That sounds a bit counter-productive to us, but who are we to argue? It falls to Mario (as always) to save the day by rescuing Bleck’s captives – yes, even Bowser – while aided by new partner characters called Pixls.

Super Paper Mario was the first game in the series to truly divide Paper Mario fans, because it ditched the turn-based RPG formula entirely and instead offered players a side-scrolling adventure with the sort of ‘jumping on heads’ action you’d expect from the main Mario series. It did introduce one clever new feature, though, namely the ability to flip the screen 90 degrees, switching from 2D to 3D and revealing the Z-axis. This reveals hidden doors and power-ups that look invisible in 2D mode because they’re paper-thin. Clever stuff.

The first handheld Paper Mario game returned to the turn-based system the series was best known for, but took things further by introducing new mechanics based around the idea of collecting and applying stickers. The results were mixed, and fan reaction was similarly diverse as a result.

The game is set during the arrival of the Sticker Comet, which lands in the Mushroom Kingdom every year and contains Royal Stickers that can grant the desires of anyone who wishes on the comet. Bowser turns up to get his wish granted but messes things by touching the comet, causing it to explode. One of the Royal Stickers lands on him and corrupts him with its power. We imagine you’ll be stunned to hear that the first thing he does right after this is kidnap Peach. Cue another rescue mission, this time involving the recovery of the other Royal Stickers en route.

Sticker Star’s central mechanic involves collecting stickers and using them to perform moves during battles. The main issue many had was that these stickers can only be used once before they’re removed from your inventory, meaning you constantly need to top up your stickers. Some of the game’s main story puzzles also involve placing special stickers on top of the actual environment, but it’s argued that sometimes the game doesn’t go a good enough job of making it clear what you have to do next, meaning many players found themselves stuck and frustrated.

By the time the next Paper Mario game came to the Wii U, the system had already flatlined and Nintendo had already revealed the Switch to the masses. As a result, Color Splash was by far the lowest selling game in the Paper Mario series. It could be claimed, though, that anyone who played Sticker Star wasn’t really missing out much, because Color Splash doubled-down on its 3DS predecessor’s controversial combat system.

It goes without saying but while Sticker Star’s plot revolved around stickers, Color Splash instead focuses on paint. Mario and Peach travel to Prism Island after receiving a ‘letter’ from a Toad (which is actually the Toad himself folded up) and arrive to discover the island is full of areas that have been drained of colour. It’s all down to Bowser, naturally, but it’s not entirely his fault this time: he’s been possessed by black paint which has turned him particularly nasty. Oh, and he’s nabbed Peach again for good measure.

Combat is still turn-based but once again revolves around consumables; gone are the stickers and replacing them are cards with various attack and defence moves on them. This means all the criticisms levelled at Sticker Star were recycled for Color Splash, most notably the need to keep collecting cards in order to perform even the most basic attacks. Despite this, the game was still praised for its beautiful environments and its detailed art style: this was the first Paper Mario game to be presented in HD, after all.

And so we come to the latest game in the series, which tries to mix things up once again with a unique turntable-style combat system which makes battles feel more like a puzzle game than a turn-based RPG.

This time Mario is trying to save the Mushroom Kingdom from the titular Origami King, who’s turned many of its residents (including Peach, of course) into origami slaves. Accompanied by his adorably enthusiastic origami pal Olivia, Mario has to travel the land in search of ways to remove the giant coloured streamers that are wrapped around Peach’s Castle.

We could go into greater detail about The Origami King here, but we’ve just written a blooming hefty review of the thing, so head over there to find out in much greater detail just how well it ranks against the rest of the games in this often controversial but always brilliantly creative series.

Video: Check Out This Side-By-Side Comparison Of Crash Bandicoot 4 On Switch And PS4 Pro