Let’s hope MachineGames isn’t going to deliver the gaming equivalent of Kingdom of the Crystal Skull.

Yesterday, Bethesda managed to snag the attention of movie and gaming geeks alike with a 30-second teaser trailer for a new Indiana Jones game. Confirmed to be in development from MachineGames (the studio behind the Wolfenstein series) and with input from Todd Howard and Lucasfilm Games, the as-yet-untitled project will be the first official Indiana Jones game since 2011’s Indiana Jones Adventure World. (That one was a Facebook browser game, in case like me you’d never heard of it until just now.)

But even a decade on from that last — let’s not pretend otherwise — underwhelming video game outing for old Indy, can this new game compete with the best of what’s come before?

The newly-announced project is, by my count, the nineteenth video game to see the player pick up a bullwhip and don Indy’s distinctive battered fedora. That’s a lot of history, spanning from the original 1982 Atari tie-in game for Raiders of the Lost Ark to the present day. And while it’s only fair to admit that these games were not all stone cold classics, this new one still has a pretty high bar to clear if it wants to stand alongside the best.

Fellow enthusiasts for golden age point-and-click adventure games will likely have fond memories of Indiana Jones and the Fate of Atlantis. Released in 1992, Fate of Atlantis pulled off a rare feat indeed: a video game tie-in to a popular movie franchise that was both a critical and commercial hit. Of course, it was helped along significantly by the fact that it was developed by LucasArts, allowing it to benefit directly from the involvement of Indy’s creator as well as the developer’s proven experience with original adventure game franchises, including the already popular Maniac Mansion and Monkey Island series.

Meanwhile, the last time everyone got really excited for an Indiana Jones game was in 2005, when a tech demo for the Euphoria Engine promised a rip-roaring action-adventure for Indy on the PS3 and Xbox 360 platforms.

Lest we forget, what we eventually got four years later in 2009’s Indiana Jones and the Staff of Kings was a decent but not exactly earth-shattering game which only saw the light of day on the already past-its-prime PS2, the Wii, and the handheld PSP and Nintendo DS consoles. It wasn’t a complete disaster, but it was nowhere near in the same league as the Fate of Atlantis either, and even twenty-nine years on it’s rare to find anyone willing to contest the latter’s status as the best Indiana Jones game by a wide margin.

Indiana Jones and the Fate of Atlantis presents an original story which is largely acknowledged as canon to the movies — which seems to be the direction the new Bethesda project is taking as well. A promising bit of common ground to start from, maybe; but of course Fate of Atlantis has accumulated three decades’ worth of rosy nostalgia by now.

As many of my fellow millennials have been discovering over the past decade or so, nostalgia can be a powerful drug. The steady return of media franchises beloved by the children of the 1980s and 1990s has certainly proven lucrative, even if opinions on the quality of these revivals have often been divided. You only need to mention Indiana Jones’s last big-screen outing in 2008’s Kingdom of the Crystal Skull to a fan of the original trilogy, and you’ll likely receive a forceful reminder that getting more of something we thought we wanted is, as often as not, a poor substitute for the thing we’re really missing.

Of course, it’s in our nature to remember things differently to how they really were. I remember loving Indiana Jones and the Fate of Atlantis when I played it about a decade ago, and I genuinely think it’s the best game released under the license. But I’m choosing to edit out of my memories the occasional frustrations I felt at the early nineties gameplay style which by then I had long since unlearned, not to mention the sometimes obtuse golden age puzzle elements that stumped even contemporary players.

Around that same time I played and genuinely enjoyed both of the fairly by-the-numbers Indiana Jones LEGO games. And if I’m being honest, I should also admit to having had a pretty fun time with Indiana Jones and the Emperor’s Tomb on PS2 — the first game in the now largely forgotten but really quite decent trilogy that would end with Staff of Kings. But I rarely think back on them now. The actually very happy times I had playing these more middle-of-the-road titles begin to fade from memory, until only the strongest impressions remain. 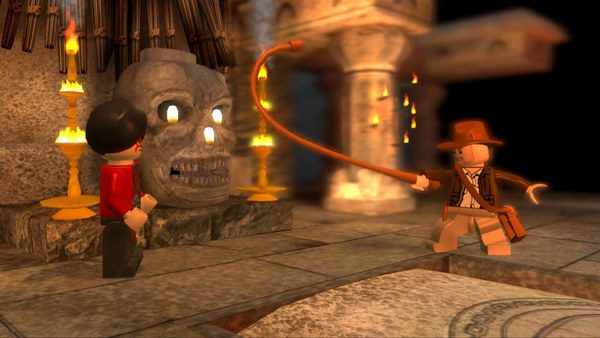 So the real challenge this latest project faces now is not to outdo the likes of Fate of Atlantis — which, on a purely technical level, this development team should easily have the ability to do — but to overcome our nostalgia for them.

But it’s clear that Bethesda, MachineGames, and co. know this — which is why the teaser trailer plays on our nostalgia more than anything. All it really gives us is a lingering glance at a handful of iconic items, a hint of their unseen owner’s nearby presence, all accompanied by a few wistful strains of that unforgettable theme. It’s laser-guided marketing which aims not to show us the new game in any detail, but to emphasise to us that we already know what we love about it.

As of yet, we don’t really know any details about this new Indiana Jones game. At this stage of development, it’s likely no-one really knows what the finished product will look like. But as I sit here and happily hum the Raiders’ March to myself for the twentieth consecutive hour, I can’t help but feel that this first teaser trailer has achieved exactly what it set out to do.