Fans of the roguelike and roguelite genre have had some real gems to enjoy over the last couple of years, with excellent games like Dead Cells and last year’s award-sweeping Hades serving up some incredibly satisfying run-based dungeon-crawling on Switch.

Curse of the Dead Gods is another example that’s been steadily building its fanbase in Early Access on Steam for some time now, and developer Passtech Games is bringing its crunchy, punchy combat and lovely particle effects to a Nintendo system near you very soon — it’s launching on Switch eShop on 23rd February. The word on the street (well, on Steam at least) is ‘Very Positive’, so you’ll want to pay attention if you’re partial to punchy, crunchy combat and explosions.

We caught up with Passtech’s Margaux Saly to find out more about the studio’s history and inspirations, how the team views comparisons to Supergiant Games’ god-filled, top-down action title, and what we can expect from the Switch version of this multiplatform roguelite…

Nintendo Life: For anyone who might have missed it, can you give us a brief outline of Curse of the Dead Gods and what it’s about?

Passtech Games: Curse of the Dead Gods is an action roguelite that takes place in a cursed Temple. You seek eternal life but end up caught in your own trap. You’ll be up against a horde of enemies in the dark corridors of the Jaguar, Eagle and Serpent Temples; you’ll fight the Champions and deadly Bosses of these places, only to die again and again. But you’ll rise and get stronger as you find ways to escape death.

The Temple is ruled by the God of Death, Xbeltz’aloc, who takes a malicious pleasure in using your greed against you. Pay with your own blood at altars to get better equipment, but face the consequences by suffering Curses that define the course of each run through random modifiers. Defeat your foes, but get ready to outwit the traps covered by the shadows. Light is your best ally in the Temple!

Tell us a little about Passtech Games – how big is the team and how long have you been together?

Passtech Games is a small French studio, based in Lyon. It was founded in 2012 by Sylvain Passot as a one-man studio, as he was working alone on the first game. It grew over the years, as the projects became more and more ambitious. All the core members of the team joined Passtech Games a few years ago, and we knew each other already from previous projects at different game studios.

We have released four games together in total: a tower-defense called Space Run, its sequel Space Run: Galaxy, a top-down adventure game named Masters of Anima, and, of course, Curse of the Dead Gods. Today, we are about ten permanent members in the team, and sometimes a little more during the production phases. 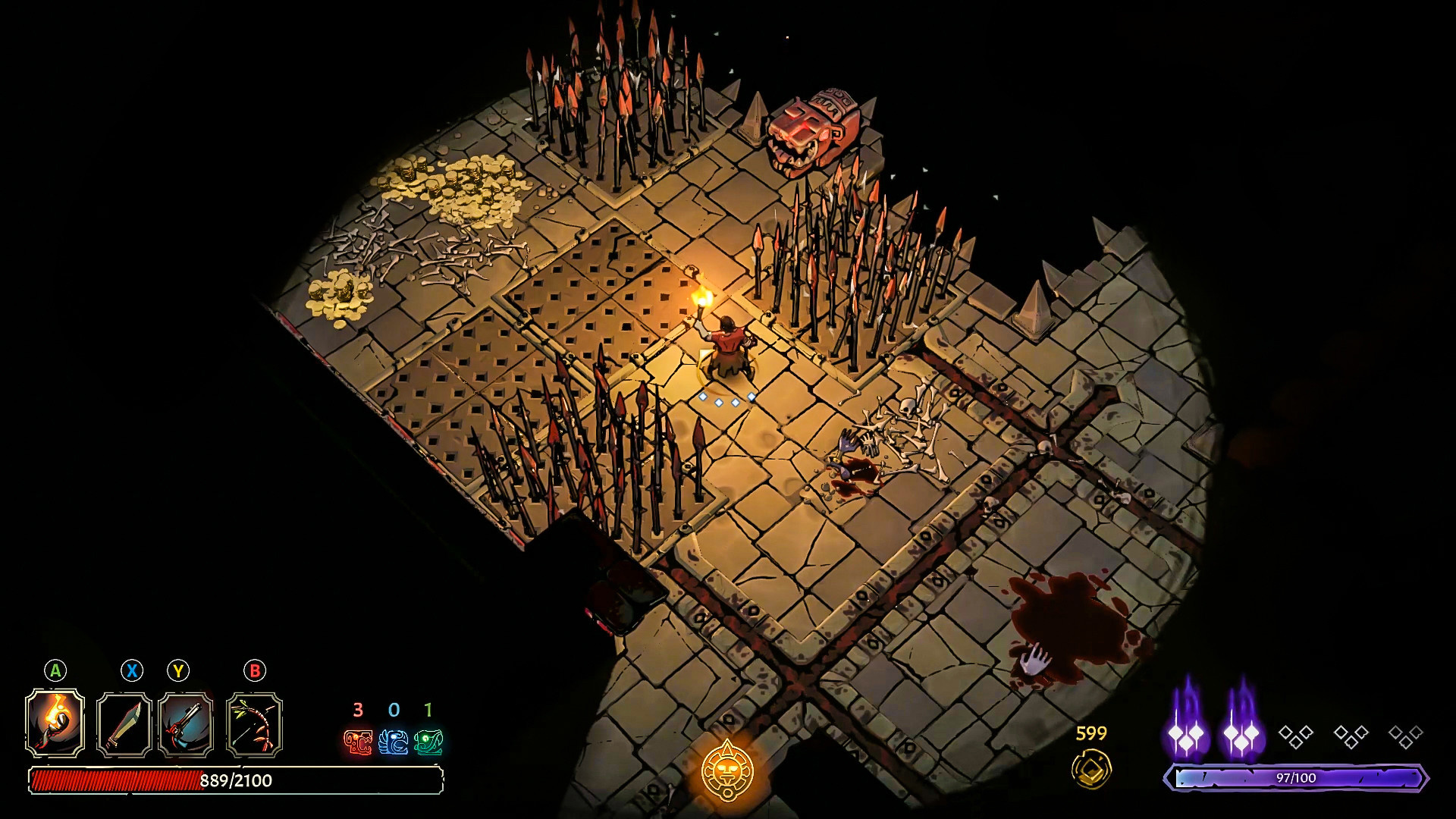 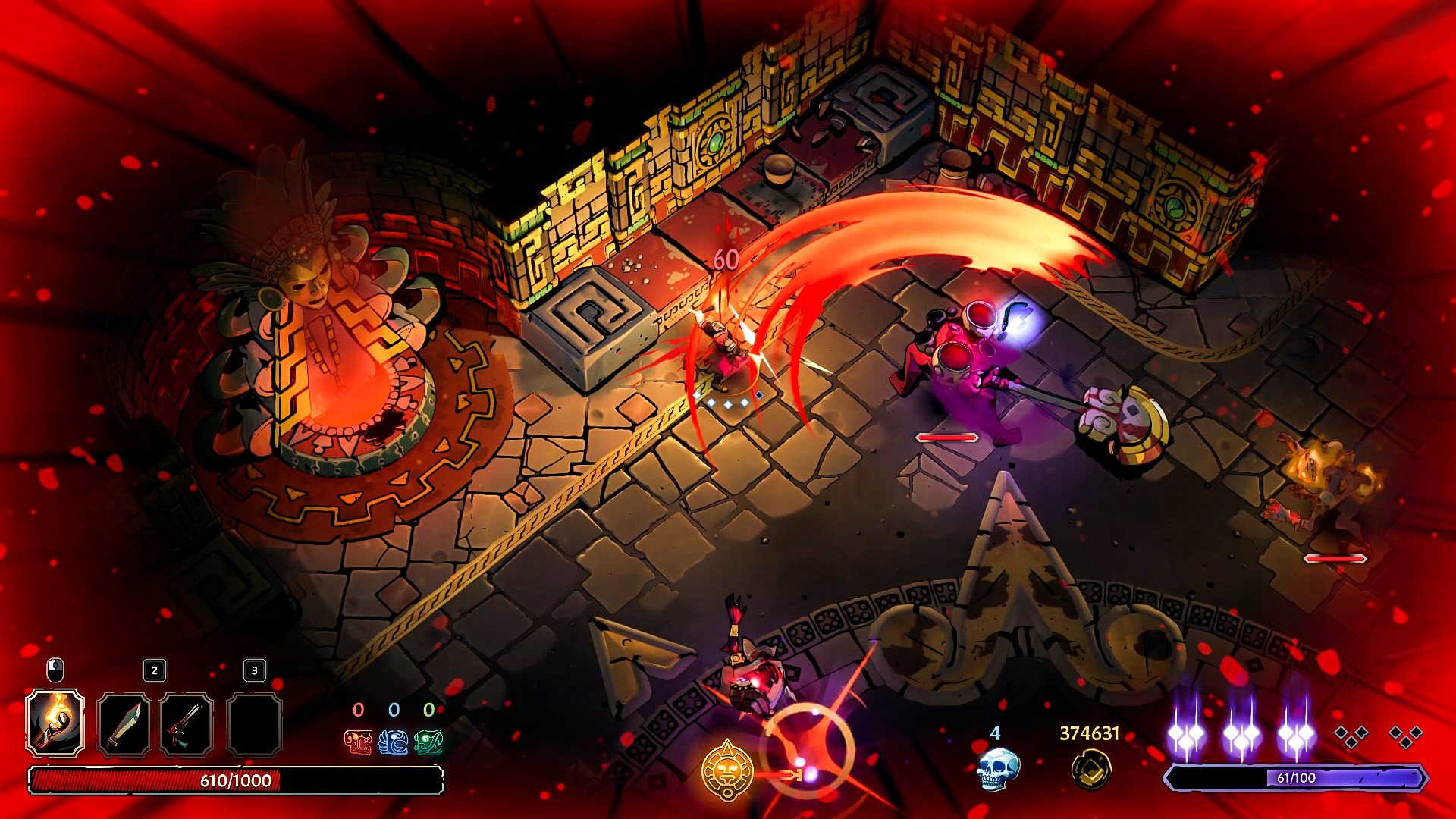 COTDG has been in Early Access for a while now – how long have you been working on the game, and how did the ideas behind it develop?

We started working on the concept of Curse of the Dead Gods in 2018, just before the release of our previous game, Masters of Anima. We knew we wanted to move on to a much darker and punchier game, so we spent a lot of time creating the combat system and the game’s artistic direction. We took inspiration from our favourite games – mostly Darkest Dungeon for the comic book art-style, and The Legend of Zelda: Breath of the Wild for the 3D cell-shading rendering.

We liked the way the roguelite genre worked, we thought the top-down camera was fitting as well as the game mechanics we were testing at the time. It was also a genre that allowed us to offer a challenging, skill-based experience; while incorporating a large progression curve and a lot of content. Right off the bat, Early Access seemed like the perfect fit for Curse of the Dead Gods as it involved the community in the development!

How has the game’s Early Access period shaped and altered the end product?

The Early Access format has contributed greatly to the development of the game. Of course, we had our own guidelines with all the main content we wanted to integrate into the game, such as the Serpent and Eagle Temples. The community helped us a lot though, in expanding our list and testing gameplay mechanics on a large scale. In fact, some of the ideas have been modified thanks to direct feedback from players. Early Access is really a great tool to balance a game and bring fresh ideas to concepts. Even though we had a very precise vision of our game, it was always interesting to take into account the suggestions of the community and try to integrate them into the existing mechanics.

The community helped us a lot though, in expanding our list and testing gameplay mechanics on a large scale. In fact, some of the ideas have been modified thanks to direct feedback from players.

On the other hand, we also needed to trust ourselves as developers, because the goal of Early Access isn’t just to blindly accept all the feedback from the players. There was necessarily a certain amount of questioning and pondering on ideas. For example, we would get some negative feedback on the Final Curse (which is pretty bad and it’s meant that way), but it was coming from players who didn’t truly understand the purpose of this Curse. On the other hand, players told us when we made a bad decision regarding the way to reward them with meta currencies, so we decided to listen to them and adapt the concept.

Anyway, it was great to see all these players getting involved in Curse of the Dead Gods and getting to know it so well that they knew what could and could not be added.

Launching a game across multiple consoles is always a challenge – how smooth was the process of getting the game running on Switch?

A real challenge, for sure! But we are very proud of the way the game looks on the Nintendo Switch and other consoles. It doesn’t betray the PC version, even if of course we made some concessions in the game’s graphics rendering and performance. Today we are satisfied with the result on Nintendo Switch with a resolution of 920p when the console is docked and 720p in handheld mode, as well as 30 stable frames-per-second, which is greatly appreciated for a game where reflexes and fluidity are paramount. Of course, if we have the opportunity to further optimize the game on consoles, we will do it!

Following Supergiant’s success with fellow roguelite dungeon-crawler Hades last year (another game which went through a lengthy early access period), has the reaction – and the go-to comparison – to that game affected your approach to COTDG in any way?

First, we were really happy to see such an amazing reaction for Hades and Supergiant Games. It’s always nice to see a game succeed, especially when you can see they clearly put a lot of passion into it.

As for the comparison, to us it stops at being an action top-down roguelite. These are two radically different games in the way they present themselves. Curse of the Dead Gods is almost a strategy game where every move has to be thought out to avoid it falling back on us, whereas in Hades you can get carried away by the superb frenzy of the fights. The success of Hades and its comparisons didn’t affect our approach on Curse of the Dead Gods at all. Our game was already in development before Supergiants’ announcement, and as I said before, they remain two fundamentally different games. Still, it was very interesting to see what they were able to make with the genre, as it was truly innovative and effective. One can only be flattered by such a comparison after all.

Curse of the Dead Gods is almost a strategy game where every move has to be thought out to avoid it falling back on us, whereas in Hades you can get carried away by the superb frenzy of the fights.

How much of an impact has the last year-or-so of global tumultuousness affected the game and team?

Fortunately, we are in an industry that is not too affected by the pandemic head-on. Almost all of our jobs can be done remotely, and that’s a real boon, especially when we’re in the middle of developing our game. Lockdown in France began shortly after the release of Curse of the Dead Gods in Early Access and we had to readjust our working methods. Of course, this affected our productivity in the beginning because we had to get used to a new rhythm and new ways of working together. At Passtech Games, we were already working remotely from time to time, so the whole team was ready to work from home. But it’s true that when it came to exchanging ideas, bug fixes, mechanics, etc. it wasn’t very practical. Our Early Access suffered in a way, because we would have liked to be able to integrate even more content, but we had to make choices and cross things off the list. Hopefully we’ll be able to add them after the game’s release if it’s successful.

Once the game is out, do you have any concrete plans regarding post-launch?

We are currently working on the first post-launch patch, which should be released in the first two-three months after the game’s release. It brings new content such as new Weapons, Relics and Curses, and even a nice surprise for roguelite fans! We won’t say more for now, but you’ll know all about it soon enough! After that, we’ll take a step back from the development of Curse of the Dead Gods to see what the players and the community have to say about it, and hopefully they’ll enjoy the game as much as we do so we can keep adding new things!

Is there anything else you’d like to mention that we haven’t touched on?

We look forward to sharing Curse of the Dead Gods with the Switch gaming community and hope you’ll enjoy our cursed Temple!

Our thanks to Margaux and Passtech for taking the time to answer our questions. Curse of the Dead Gods launches on Switch on 23rd February.

Halo: The Master Chief Collection: 343 Teases a ‘New Place and Way to Play’

Prison Escapee Recaptured After He Tried to Buy Call of Duty