I enjoy feeling great at video games even if I’m bang-average. I get enough of being okay in everyday life, so when a racing game makes me feel like I am one with the car I think a special part of my brain unlocks. Dirt 5 is such a game, letting me feel like I’m in The Matrix and have taken that special pill from Limitless. This is a longwinded way to say that Dirt 5 is a top-notch arcade racer, and one that fills a gap that very much needed filling.

Importantly, Dirt 5 is a very different experience to the Dirt Rally series. If you want the point-to-point stage events, Dirt Rally is there for you. While Dirt 5 has some traditional rally stages, they are not the focus and are not multi-stage affairs – plus you have the entire pack of opponents jostling with you, which isn’t very pure rally.

Also missing is a co-driver, so you don’t get useful info on upcoming corners. There’s also no rewind feature, a series mainstay for years. While I thought this deliberate omission would lead to frustration, in truth I rarely felt the need for it and instead made more of an effort to learn where best to take risks on courses.

Career mode presents you with five event groups, each comprised of numerous races. While this starts off as a linear path through the races, it soon opens up to allow for any less favored race types to be ignored. I’m not a huge fan of the sprint races that require the use of the cars with the ridiculously oversized wings, so avoided them. Trick-focused Gymkhana also doesn’t really do much for me, so I skipped over most of those too. The good news is that there’s so much on offer that this kind of picking and choosing doesn’t make the game feel small.

The circuit-based Ultra Cross races, point-to-point Rally Raids, Ice breaker short circuit events, and super off-road Pathfinder tracks are all high points, but the key is that there’s a lot of content here, with all the events spread over 10 locations. Add in varying weather and time of day and I never felt like I was having to grind the same locations to make progress – in fact, I only found myself going back to earn some extra required stamps on one occasion as I worked through the career.

These events are tough, but great fun.

As I said, it’s great to feel like you’re good at something. Online leaderboards are there for those who want to challenge themselves, and getting 100 percent completion will take a higher level of competency and a lot more time. I haven’t crunched the numbers, but I made it through the career with what looked like at least half the events left to play. On top of that, there are a dozen or so Throwdown events against specific AI racers, plus some sponsorships to handle, offering bonuses based on race performance.

Playgrounds is the user-created content portion of Dirt 5, letting you knock together custom courses in arenas. You can pick between checkpoint races, Gymkhana trick events, and an object smash high-score event. It’s early days and so hard to say how good these courses will be, but there’s already a lot of promise being shown. I attempted to recreate my semi-local multi-storey carpark, got fed up after 10 minutes and quit before I’d managed to build a second level, but the tools seem solid.

Online modes are split between proper racing and party events. Vampire is the successor to Outbreak mode from Dirt 3 and is superb fun as you hunt down other cars or try to evade the touch of the vampiric car troop. On the more serious side, the event types found in the career mode are playable online with a maximum of 12 players. At the time of writing I’ve only managed a handful of online races, but performance was good.

With Dirt 5 being a next-gen launch title for PS5 and Xbox Series X/S, I’ve seen a fair bit of commentary online about how it’s not much of a looker. Those people are wrong or have extremely high standards. While I’m not talking about the next-gen versions here, on Xbox One X and PS4 Pro (I didn’t test on the base consoles) Dirt 5 can look gorgeous, with a touch of Motorstorm and Driveclub about its visual makeup. Draw distances are superb, and little visual flourishes such as sandstorms and fireworks at night add a spark. 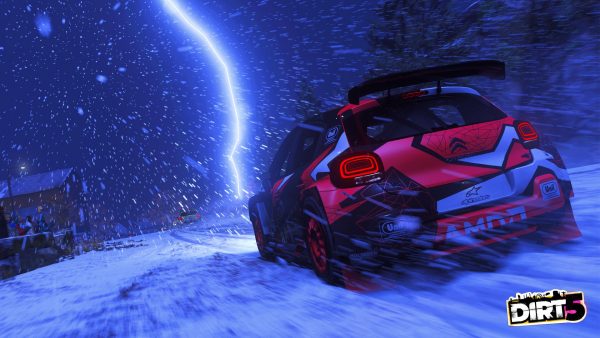 If there’s a blemish it’s the frame rate, especially on Xbox One X. Dirt 5 offers two visual settings, one prioritising frame rate and the other pushing resolution. For me, neither is the ideal option on One X, with the frame rate mode being just a tad under locked and with a bit of screen tearing, and the resolution option a bit too uneven in performance. I ended up bouncing between the two, unsure what I liked best, but knowing that I didn’t love either. It’s a shame, but not a devastating blow, and something I expect the Xbox Series X/S versions will not suffer from. On PS4 Pro the situation appears better, at least to my eye. Frame rate mode and resolution mode both seem to stick to their targets without as much deviation. In their current states, then, I’d opt for the game on PS4 Pro, but future patches could change this.

Worth mentioning is the impressive soundtrack, which managed to make me feel ancient at points but also caused reactions such as “oh, that’s Pearl Jam,” and “ooh, that’s not bad,” while I whipped out Shazam to see who a previously unknown band was. Less successful is the in-menu radio show/podcast. It’s not bad by any means, but I couldn’t help but liken it to the kind of talk radio my mum used to put on to “keep the house company” while she was out.

I’m a big fan of Dirt 5. It’s not going to garner the praise of a Gran Turismo or a Forza, but it’s exactly the kind of game I was after. It’s fun, easy to get into, full of variety, looks pretty, and features cars that slide beautifully around corners. Dirt 5 is a feel-good game at feel-bad time, which is about the best time for it to exist.

Versions Tested: Xbox One X and PS4 Pro. Copies of the game were provided by the publisher.

Godzilla and Kong Clash in World of Warships: Legends May Update

Godzilla and Kong Clash in World of Warships: Legends May Update