I’m not saying that you shouldn’t buy the new next-gen consoles, but VR is still able to deliver unrivalled thrills.

Prior to the last month, I’d dabbled with VR. I wouldn’t say I was a VR convert or evangelist, but the time I’d spent with PlayStation VR and a couple of PC VR headsets was impressive. Not impressive enough for me to invest myself mind you. PS VR was the most in reach for people, thanks to not requiring a reasonably decent PC to go along with it, but its wired tether and low-ish resolution made it just miss out on being wholly recommended. The Oculus Quest 2, a completely standalone, wire-free VR console and headset in-one, is an easier recommendation, although one that too isn’t without caveats.

If you, too, were put off by the faff involved with previous VR kit, the Quest 2 is no more painful to get set up than a normal console, the biggest issue really coming from how awkward it can be to get the headset snug on your face with the included strap (an optional Elite strap can be bought, and our own Alex Donaldson claims it’s “transformative”). There’s a slight element of flicking between the Oculus app on your phone and the view through the headset, but it’s pretty smooth and before long you’re in and more or less immediately in awe.

Part of the Quest 2’s setup is to set boundaries in your play space. This neat feature lets you map out a safe zone, with games presenting you with grid-like virtual barriers should you stray too close to your TV, dangerously positioned pile of toys, or similar hazards. Of course, it’s ideal to clear as big an area as possible before you lay down your zone limits, but generally, I was able to play more or less freely in a reasonably clear, moderately sized living room.

Onto the games. I audibly said “wow,” which for anyone that doesn’t know me is perhaps the biggest compliment that I could give some new hardware. I hate the term jaw-dropping, but if I was going to lazily use it in an article, I’d use it here. The free welcome/training game that lets you interact with some toys, fire guns, and then dance with a robot are a brilliant introduction to the Quest 2. The way the controllers can essentially become your hands is superb, and it didn’t take long to feel fully immersed in the virtual world.

As a general bit of info, my initial forays into VR were fairly short. I found that I’d start to feel a bit dazed after more than 20 minutes or so inside a virtual world. I don’t know if everyone will be like this, but I had a period of acclimatising to the whole thing, and can now spend far longer inside games. I still feel like I need to take a break more regularly than when playing traditional video games on a TV or monitor, but that’s probably good for your eyes anyway.

In VR Superhot is incredible.

I tested a bunch of games that support the Quest 2, with my favorites being the incredible Super Hot and the energetic Beat Saber. The former was already brilliant on PC and consoles, but in VR it reaches a higher level. The way you can actually dodge bullets with your body makes the time-control shooter a must-play Quest 2 title. Plus, either I am terrible at aiming with a console controller or my aim in VR is significantly better. Cliche, but I felt like I was there, pulling off the ridiculous action movie scenes in supreme style.

Beat Saber, in which you flail your arms about as sabers that slice through musical beats that are flying towards you, is a simpler experience but no less exhilarating. It’s a game that just works beautifully in VR and also perfect to show-off to non-gaming friends and family.

That aspect of VR, as the centrepiece of family and friend gatherings, isn’t something I’d considered with previous VR kit. It just wasn’t practical to give everyone a go when you had wires to contend with on top of the console/PC the headset was connected to. I’ve had evenings with my family taking turns in VR, and it was great fun. Seeing the sheer amazement on my son’s face cemented my thought that the Quest 2 is some top class kit, but he did raise an important point: “can I play Mario on this?” he asked.

Of course, I don’t expect Nintendo to make games of the Quest 2, but as a general point around high profile games on the Quest 2, the current catalogue is definitely missing what I’d call the real big hitters. The Walking Dead: Saints & Sinners, an excellent VR experience I would add and one of the more complete games on the platform, joins Vader Immortal, and Five Nights at Freddy’s in the high profile list. They are some big properties, for sure, but don’t buy a Quest 2 hoping for VR FIFA, Call of Duty, Assassin’s Creed or the like. Indeed, even the next big VR release, Medal of Honor: Above and Beyond, doesn’t currently have a confirmed Quest 2 port in the works, but there are murmurings. There’s a sense that the storefront here is a bit second-tier at points, not quite offering the line-up that would really make these headsets fly.

It’s also worth pointing out that the by-all-accounts utterly amazing Half-Life: Alyx is not available on the Quest 2. That said, other VR faves such as Job Simulator and Pistol Whip are available. It’s worth taking a look at what games you can play on the Quest 2 before you make the purchase, just so you can set your expectations, not because the games aren’t great but that they might not be games from the franchises you’re expecting. 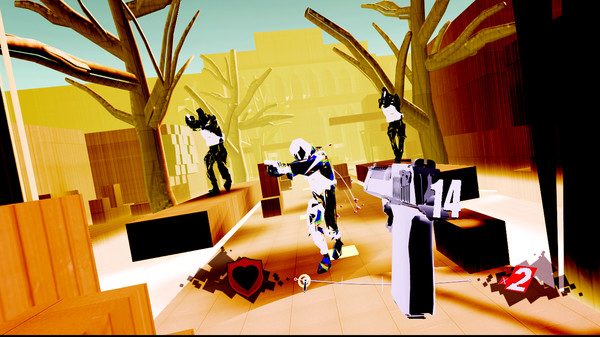 Pistol Whip is a great game, but not an AAA that will turn heads.

You can play more advanced VR games on the Quest 2 if you hook it up to a good PC (including Half-Life: Alyx), something I haven’t been able to test as, well, I don’t have a good PC. But then you’re also looking at a different market of headsets where competition is fiercer. The Quest 2 excels as a standalone system that is available at a price that is less off-putting than previous headsets. The 64 GB version is $299/£299 while the 256 GB version is $399/£399. Sadly the headset doesn’t include the option to expand your storage with Micro SD, so you’ll have to make a potentially difficult decision between saving £100 or not having to worry too much about running out of space.

Other issues I’ve seen mentioned are the field of view, which I’ll be honest and say I don’t have a problem with – but note that I haven’t used the original Quest so can’t compare it. There’s also the issue of Facebook account logins, which you’ll have to make your own call on. It was a smooth process, but one that may well be a barrier to entry that you don’t want to cross.

That headline might be a bit baity, but it’s really true. I’ve now used the PS5 and Xbox Series X, and while I love them and think they are both going to deliver amazing experiences, neither dazzled me like the Quest 2. Whether I’d buy a Quest 2 over one of those consoles is a trickier question to answer, but if you’ve been tempted by VR for a while and want a headset that just works, I don’t think this will disappoint.

Spider-Man PS4 saves will work with the PS5 remaster after all, but not at launch