It’s probably a contentious thought, but does Space Invaders really need to keep coming back? We get it, the game was important. Is it fun to play Space Invaders in the year of our lord 2020? God, no. Not in the slightest. The game, in anything close to its original form, simply doesn’t hold up. But taking a 1978 game to task for being dated is just daft. Taking a compilation of Space Invaders-adjacent games to task for being utterly redundant, though? That’s our pleasure and privilege.

See, this is like the kid brother of expansive compilation Space Invaders: The Invincible Collection, packing a mere three games to the full set’s nine. A third of the games. To give Space Invaders Forever due credit, they probably chose the most interesting titles for this digest, but unfortunately that isn’t saying much given what’s on offer. As we said, Space Invaders simply isn’t that interesting of a game, and it’s only really been overhauled into something interesting a handful of times. Space Invader ’95: Attack of the Lunar Loonies springs to mind, uncollected since Taito Legends 2 and sorely absent both here and in the Invincible Collection. So what do we have here? 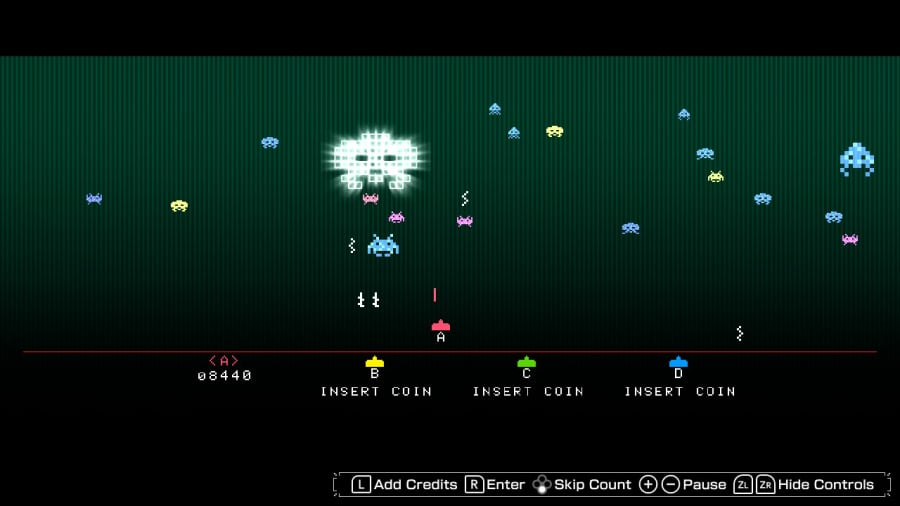 Not a whole lot, as it turns out. Space Invaders Gigamax 4 SE is a multiplayer take on the game that offers, quite simply, a much wider playing field, but is otherwise as dull as the original offering. Unfortunately, zero entertainment value multiplied by any number of players still equals zero. The sheer width of the thing does, we suppose, make for a brief initial burst of novelty value. There are a couple of further rounds that seem like they’re going to be more interesting, but then you and your friends will realise you’re all going to be playing the slow, laborious Space Invaders anyway, and it’s immediately swept aside in favour of crushing ennui. Get Cake Bash back on, will you, mate?

You’ve also got the somewhat superior Arkanoid vs Space Invaders on offer here, and it does deliver at least a frisson of excitement. Turning the Switch on its side, you use your finger to play, not unlike a comical giant portable telephone from the 1980s. And, indeed, it’s a port of a phone game, but crucially not one that rinses your wallet. The mash-up of classic bat n’ ball-‘em-up Arkanoid with the titular Invaders is a pretty shrewd move, as bouncing the enemies’ shots back at them is a lot more fun than painstakingly pew-pewing them with your peashooter. A host of classic Taito cameos gives it a broad appeal for aficionados, and the game’s general breeziness keeps things moving. That said, while the touch input is perfectly functional, we do wish the game had been adapted for Switch in a less awkward manner. Or, more pruriently, it could have been replaced with, say a different Space Invaders title? For example, Space Invaders ’95: Attack of the Lunar Loonies? Because it rules? Hmm? No? 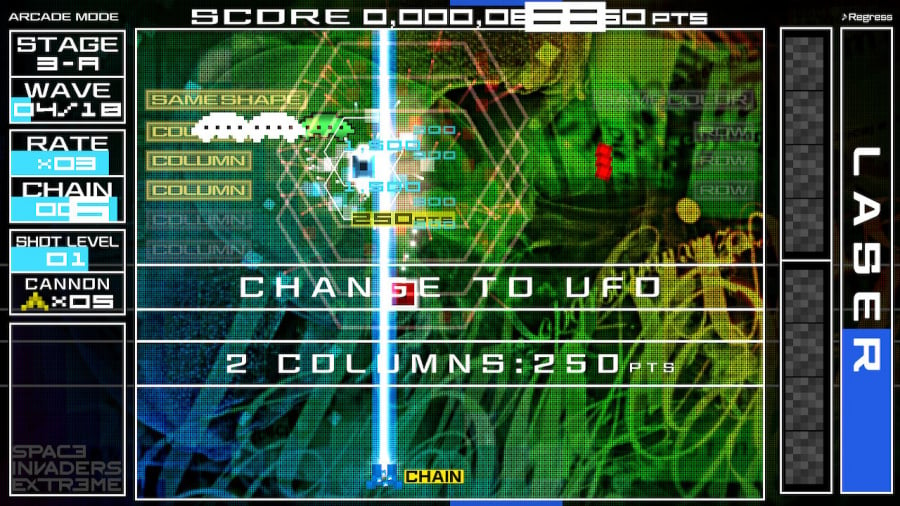 Saving the best for last, Forever brings out the big guns – figuratively and literally – with Space Invaders Extreme, the absolutely beloved Q Entertainment-esque revitalising of a game almost defined by its staid, formative gameplay. Here, it’s the contrast between the reality of the original Space Invaders with Extreme’s flashy, over-the-top clubland take on things; the central gameplay is fundamentally pretty much identical, but with the addition of game-changing power-ups, limited-time challenge screens, inventive enemy waves and the thumping, throbbing, pulsing soundtrack that seems to sync to your actions, it’s all several million steps up from its source material, evoking a genuinely intoxicating Rez-like trance state at its best. The mark of a great score attack game is that it’s fun to play even if you’re not going for the high combos, as Extreme assuredly is. It’s brilliant, and comes close to justifying the entire package.

Still, though, the asking price feels high for one great game, one okay game and one complete write-off. There are no extras to speak of, either, which raises the question of exactly who this release is for. Major Space Invaders fans will want to own the full Invincible Collection, not this half-measure (sorry, one-third-measure). That leaves people who just want Space Invaders Extreme on their Switch, we suppose, but is that really worth the outlay?

Maybe when the game is on sale, sure. Even besides this, it’s bizarre that Arkanoid vs Space Invaders is listed as a separate title altogether in your Switch menu, so if you want to hop into a quick game from playing, say, Gigamax, you’ll have to quit out of the app and launch it, rather than just jumping to the main menu. Really rather odd.

Space Invaders Extreme is awesome, but even in the guise of a cut-down compilation, Space Invaders Forever is lacking as a package. Better titles could have been chosen, and the way the apps are laid out is strange and disconnected. When it drops in price, this will be essential for Extreme alone. If you want Arkanoid vs. Space Invaders, that’s available on your phone for a fair price, and better suited to that format in general. A disappointing and confusing package, but one that we strongly recommend at a discount just to get Space Invaders Extreme. It’s that good. All six of these points are for it, and it alone.

Best Of 2020: The Game That Starred Mickey Mouse, Ghostbusters Or Garfield, Depending On Your Region

Best Of 2020: Perfect Dark Turns 20 – The Definitive Story Behind The N64 Hit That Outclassed James Bond

Cyberpunk 2077 looks to have returned to the PlayStation Store

Elex 2 officially announced, set years after the events of the first game