Modern game design can be a fickle beast, in that it often falls on either end of the spectrum of innovation. On one hand, you have games that are content to ‘play it safe’ and only stick to well-worn genre conventions that are satisfying, if not unsurprising. On the other end, you have games that try a little too hard to create something new, and end up losing their own sense of identity as a result. Star Renegades – the latest release from Massive Damage – falls somewhere closer to the latter group. Here we have a game with inspirations that include, but are not limited to, Octopath Traveler, the Middle Earth games, Grandia, Hyper Light Drifter, and Into the Breach. That’s quite a spectrum of different ideas to condense down into just one experience, and perhaps the most surprising thing is that Star Renegades actually manages to nail the execution – for the most part.

Star Renegades’ story primarily sees you taking control of Wynn Syphex, a snarky leader of the rebellion against a cosmic military group called ‘The Imperium’ in some galaxy far, far away. The key thing here is that The Imperium is on a multidimensional conquest campaign, so they’ve come from the next dimension or two over to assert their will. This is where the roguelite element comes in. You most assuredly won’t succeed on your first attempt to fend them off, meaning that universe will be conquered and you must try again to stop their crushing march in another, similar reality. 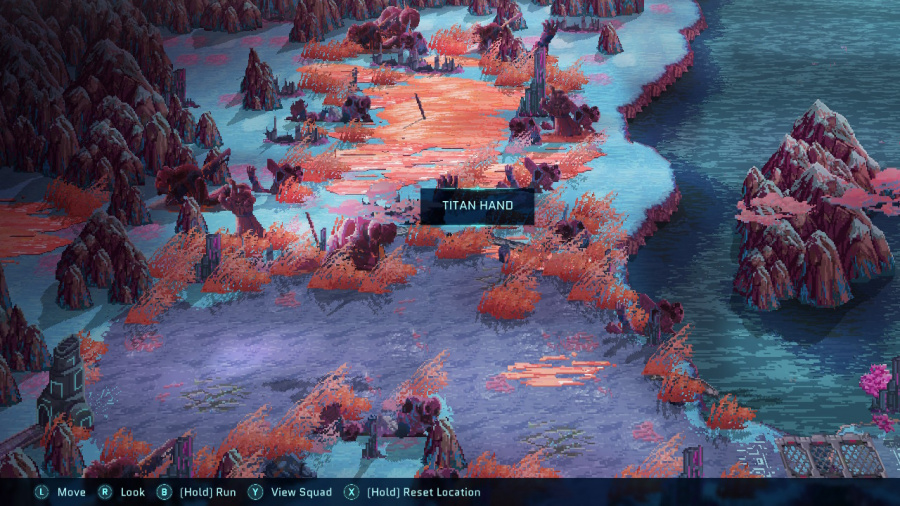 As you’d expect from a release with a looping, roguelite design such as this, the storytelling is fittingly surface-level. Sure, there are plenty of confusing proper nouns thrown around and the world as a whole gives off the impression of being quite ‘lived in’, but on a moment-to-moment basis, it’s clear that the narrative is simply there to provide a rational framework for the endlessly repeating game design. Some may decry this, but this story serves its purpose well and at the very least keeps you interested in the world itself as the hours roll by.

A typical run will see you running from planet to planet to repel the invading force there in a lengthy, multi-day campaign. You’re given a few days to reach the objective before whatever Big Bad can reach it, but the objective is usually placed at a node on the map which will take you a few in-game days to reach. Each planet’s map is divided up into nodes which you capture one at a time, and you can only take three per day before you have to set up camp and rest prior to the next excursion.

You don’t have enough time to explore every node on the map, which introduces a light, meta-strategy element to how you approach each planet. Do you take the shortest and most efficient route to reach the objective first, or do you take a few detours to pick up some valued materials? Some nodes will have nice boons – like credit caches or health refills – while others will house powerful enemies that grant you rare gear and huge EXP bumps if you can manage to overwhelm them. There are no right answers here, of course, but your decisions day to day will nonetheless affect your long-term success, which gives each decision you make a rewarding sense of weight. When you inevitably do fall, it’s almost always traceable back to a few choices you made at some point, and the consequences you did or didn’t accrue as a result. 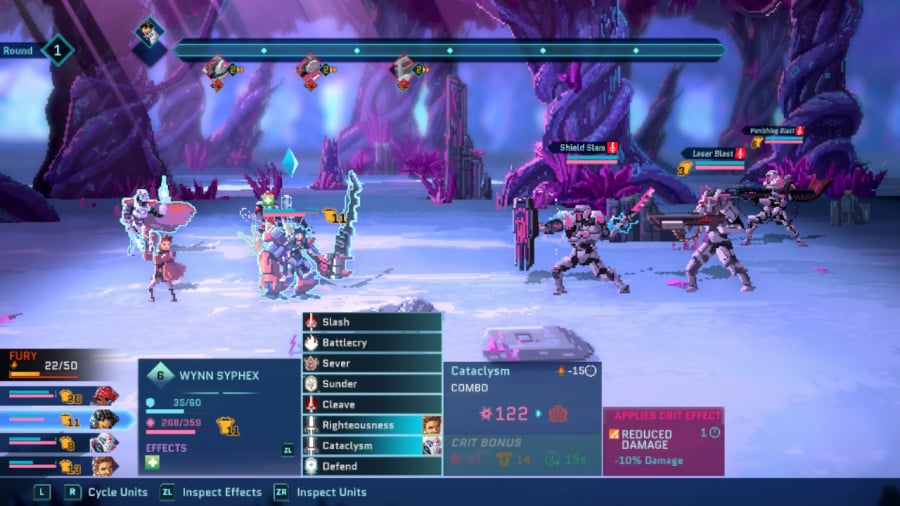 When you take on enemies, battles play out in a turn-based fashion that’s one part Octopath Traveler and one part Grandia. Each turn is governed by an overarching timeline which decides the order of enemy and player actions. At the start of every turn, you know exactly which enemies will attack, who they’re targeting, what kind of attack they’ll use, and exactly when the attack will land. Given this information, you’re then expected to respond in a way that best negates the enemies’ actions while advancing your own.

Some attacks have the ability to push enemies further back on the timeline, which then can create windows for heavier attacks with longer windup times or outright cancel the enemy’s action if you can manage to push them off the timeline completely. This also triggers a ‘Break’ status which sees their defence lowered and creates a perfect window to really bring the pain. Of course, such tactics can equally be employed against your team, too, resulting in some team members getting positively bodied if you don’t pay attention to where their move lands on the timeline.

Decisions have to be made with both the long and short game in mind, which makes every turn of every battle feel fittingly important. Each party member’s health is governed by a combination of Shields, Armour, and Health points. Shield health goes down first, and is replenished at the conclusion of each battle, while the latter two go down permanently and can only be fixed in limited circumstances. Given the difficulty of each fight, it’s all but assured that your party will take quite a beating, so each turn becomes a matter of not just figuring out how to most effectively dispatch the enemy, but also how to best distribute the incoming damage across the whole team. 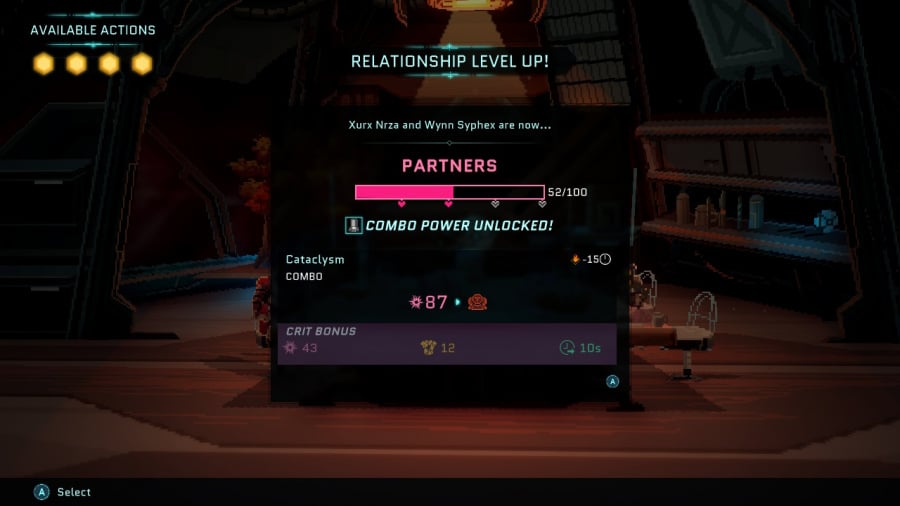 Battles are made more complex by ‘named’ enemies each having specific resistances and weakness, too, which is where the Shadow of Mordor influence comes in. Some foes, for example, may be particularly weak to Heavy attacks while others are resistant to AoE attacks. These sorts of values are determined randomly each run and differ depending on the enemy Captain you’re fighting against, meaning that every battle requires you to tweak your tactics and techniques to best fit the unique challenges you’re faced with. Though it certainly isn’t a system as deep as its clear inspiration, we rather enjoyed the Nemesis-lite system at play here, as it goes a long way in ensuring that each run is challenging in its own way.

Each team member levels up in a linear, straightforward fashion in which new attacks and cards (more on that later) are unlocked at an easy pace. Again, your decision-making skills are put to the test here, however, as you must manually distribute the EXP required to level each character. After winning a battle, this can lead to many tough choices between shoring up the clearly weak members of your party, or further buffing up the already overpowered ones. Whichever route you take, the effects luckily feel suitably impactful, meaning that each level feels like a big step up over wherever that character may have been just prior. 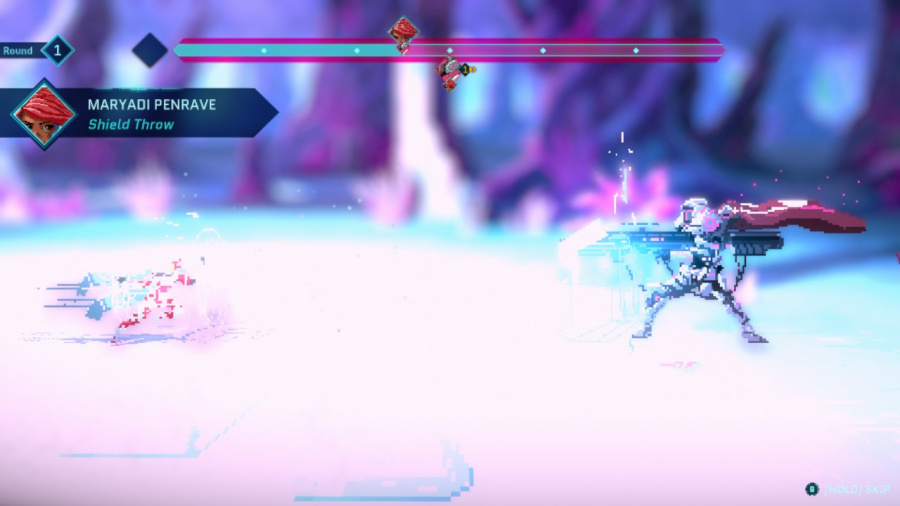 This feeling is echoed upon successfully defending a planet, where you’re then given the chance to choose a new member to add to the party. Not only does this give you yet another upgrade path to consider with your EXP, but it also gives your party a whole extra set of actions it can potentially take each turn, which can be a continental shift in some cases. Suffice to say, Star Renegades does an excellent job of making you as the player feel consistently empowered in your decision-making, as it routinely gives you several avenues of tangible, effective growth.

Case in point, at the campfire between battles, your team gets to engage in a Persona-esque relationship exchange that has a substantial effect on your chances of success. Each team member has a small collection of cards that represent varying boons – from health recovery to temporary increases to damage output – and these have both a cost to them as well as a ‘heart value’. You can use many of the cards ‘selfishly’ for that character, but you’re encouraged to grant the effects to other characters so you can bolster the relationship between them, which then has the knock-on effect of granting passive stat buffs after certain milestones are passed. 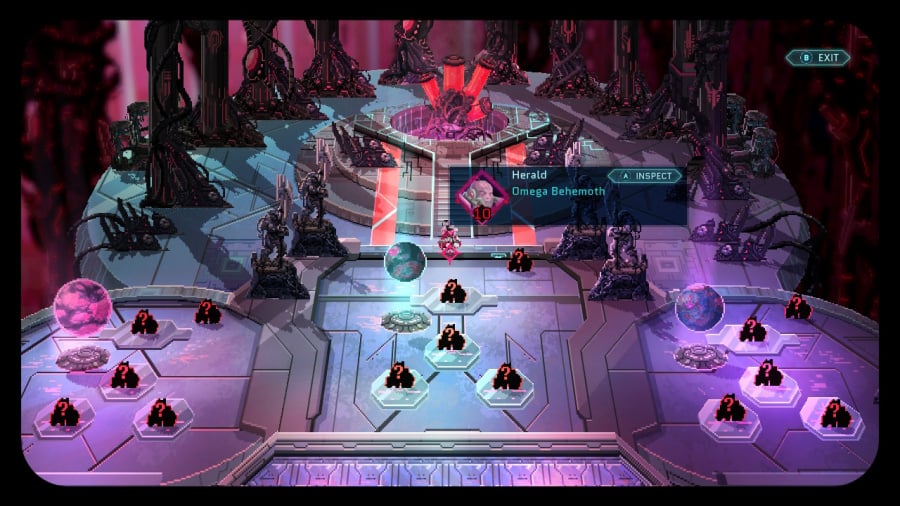 These campfire portions never last more than a minute or two given how you can only use four or five cards before you run out of points to spend, but they nonetheless can have a massive effect on the battles immediately to follow and longterm as you build relationships between characters. Like everything else in Star Renegades, you have nowhere near the resources you need to do everything you want, so a critical prioritization of your needs is necessary. Aside from all the practical benefits, these campfire portions also put int a lot of legwork for deepening the characterization of each of your party members, which nicely bolsters the somewhat thin storytelling elsewhere.

In case you haven’t gathered thus far, Star Renegades is a distinctively pondering kind of experience. This is not an RPG that you can simply play casually and expect to succeed; every decision you make both on the small and large scale has an irreparable effect on the run as a whole, meaning that you really need to spend your time scrutinizing every stat and value as you mentally play out all the angles. Those of you who enjoy such staunch consequences in an RPG will want to take note, then, as there’s plenty of customization options and important decisions to make along the way to determine whether or not you succeed. 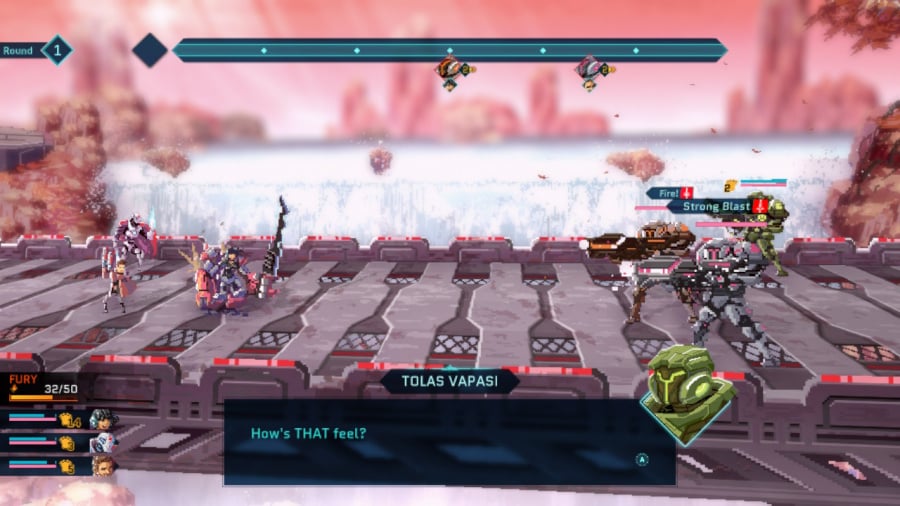 On the other hand, those of you who prefer more simplistic RPG experiences may want to steer clear, as Star Renegades could best be summed up as an extremely fraught analysis of spreadsheets and numbers to best determine the suitable outcome. This is a deep game if you put in the effort, and if you aren’t willing to put in the effort, you’ll simply fail and never come close to finding any meaningful sense of satisfaction in the gameplay.

As for its presentation, Star Renegades does a fantastic job of selling a neon-infused high science fiction world, one rife with plenty of synthesizers and impeccably drawn pixel art. Every character and enemy sprite is drawn in the kind of ‘High-Bit’ art style that really stretches the limits of what pixel art can achieve and the environments are rife with all kinds of varied geographic features – such as mountains and fallen titans – to make for plenty of visually interesting spectacles. Attacks almost always play out in a dramatic and flashy explosion of motion and light, which goes a long way towards instilling these turn-based battles with lots of energy. Those of you with an affinity for well-drawn pixel art will find plenty to love here, then, as Star Renegades proves itself to be the gift that keeps on giving on this front. 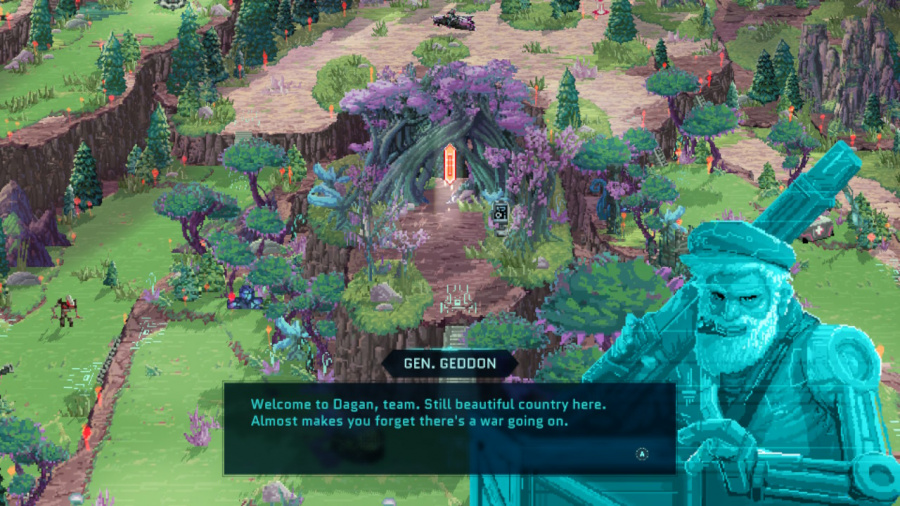 Before closing out this review, we feel it bears mentioning that Star Renegades is held back somewhat by some technical issues. Frame drops are rampant throughout the experience, especially when you’re executing some of the flashier moves that trigger a lot of screen-shake and zoom effects. Though the framerate never gets in the way of gameplay, it does still hamstring the presentation somewhat and cheapens a lot of cool moments by bogging them down in stuttering motion.

Persona 5 Strikers to be officially revealed next week