Much like Drum ‘n’ Fun!, Rhythmic Adventure Pack offers players several control options. Obviously, if you happen to own one of the taiko drum accessories, then that’s the clear way to go (although it’s unfortunately not an option in Story Mode). For everyone else, you’ve got the choice of using the Switch’s face buttons, the touch screen, or motion controls with the Joy-Con. Sadly, the motion controls are once again lacking in reliability, and switching between the red notes and blue notes (the head and rim of the drum respectively) yields poor results. Thankfully, the other control methods available are all reliable and easy to use. 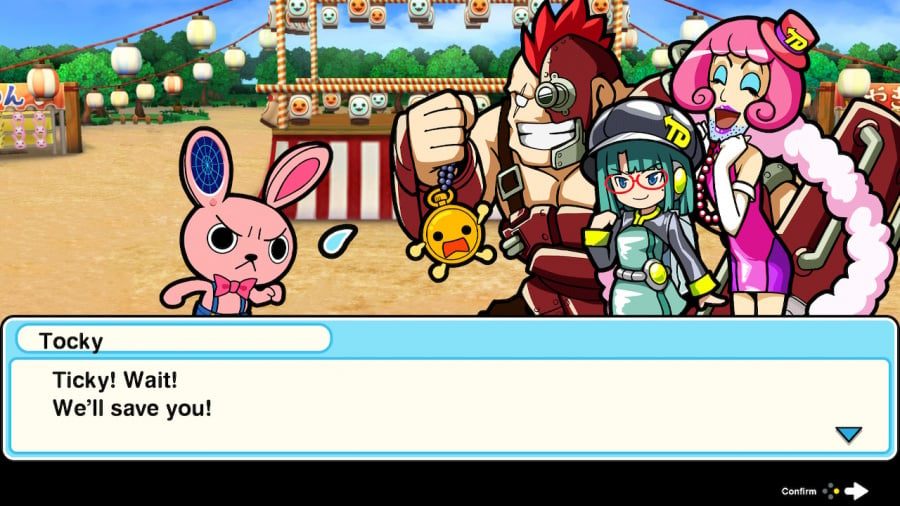 The main draw for Rhythmic Adventure Pack is undoubtedly its two story modes. You’ll be getting a fairly similar experience across both titles; by directly controlling Don, you’ll venture across a range of various locales across continents and time periods, conversing with townsfolk and battling a multitude of beasts. The narrative for both titles is suitably bonkers, and the characters are endearingly charming, whether they’re part of your team or one of the antagonists. The only drawback to the dialogue sections is the inability to skip through lines of dialogue that are verbally spoken via voiceover.

Battles during the story mode add a nice twist to the rhythmic action associated with the Taiko no Tatsujin series; you’ll need to follow the beat of the music, hitting red and blue notes with your preferred control method as usual. Successful combos allow your team members to attack their foes, but if you miss notes or consistently fail to keep to the beat, you can just as easily be attacked yourself. It’s a neat way to control the flow of the battle, and anyone fatigued with turn-based RPGs will undoubtedly find this a welcome change of pace.

One the flip side, Rhythmic Adventure 1 features fully randomised battles. Much like earlier Pokémon or Final Fantasy titles, you can run into enemies at any point whilst roaming the land. This is fine for a while, but after your ninth or tenth time thumping along to the same piece of music, it definitely starts to feel a tad repetitive. Rhythmic Adventure 2 goes a long way to alleviate this by showing your enemies on-screen, giving you the opportunity to either avoid them, or fend them off with ‘R’, hurling Katsu in a kamikaze style attack. Battling has some clear advantages, like boosting your stats, but with an abundance of long, winding routes to explore, being able to avoid enemies is a blessing. 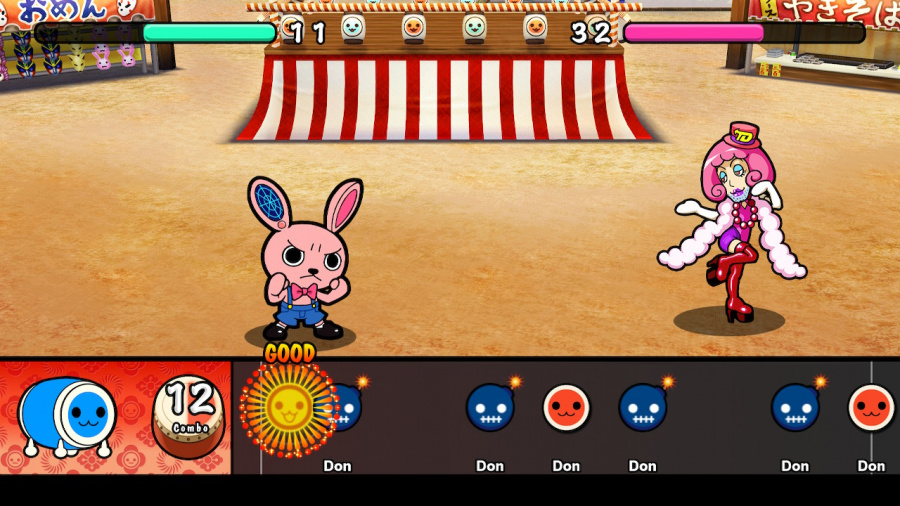 Aside from the story modes, both titles also feature the familiar Taiko Mode, in which you can choose any song you wish from a generous selection, with themes including game music, classical, anime, and more. Despite the strength of the story modes, it’s likely you’ll spend the majority of your time in Taiko Mode; it just works, and even if you’re not into some of the more upbeat, J-pop driven music that features here, there’s something immediately gratifying about nailing a difficult song, and it makes you want to go back again and again.

In short, there’s an awful lot to be getting on with here. Even if you manage to see everything in the story modes (which should take roughly five or six hours each), there’s a tonne of incentive to keep playing Taiko Mode purely for the sake of beating your high score. There’s also a fairly comprehensive stamp system (which basically acts as achievements) along with a decent character customisation feature, letting you change the colour scheme of Don and try out a variety of ridiculous looking costumes.

In terms of performance, Rhythmic Adventure Pack improves massively on the original 3DS titles, bumping the visuals up dramatically across the board, with not a single noticeable drop in frame rate. What’s particularly impressive is the load times, which are essentially non-existent; you can go from the main menu right into a song of your choice within seconds, it’s remarkable (so that fireworks loading screen from Drum ‘n’ Fun..? Yeah, that’s gone now). And of course, the real star of the show is the music, with each game boasting a huge variety, all of which sound great on your TV and directly through the Switch’s speakers.

Taiko no Tatsujin: Rhythmic Adventure Pack is an incredibly comprehensive experience that both fans of the series and newcomers will love. The story modes boast fun characters and engaging battles, though the random encounter feature from Rhythmic Adventure 1 can get a little tiring after a while. The real meat of the experience once again lies with Taiko Mode, which features a generous selection of song across various genres, and the accessible nature of the gameplay makes it immediately gratifying and addictive. It’s a shame the motion control scheme remains unreliable, and you really should invest in a taiko drum for the full experience, but thankfully the touch screen and face button controls are more than capable.

PS5 Had the Biggest Console Launch Month in U.S. History