The Outer Worlds’ first helping of DLC finally makes its way onto Nintendo Switch, having released on all other platforms back in September of 2020, and it’s a very solid return to the Hyperion System for the colourful crew of the good ship Unreliable. Peril on Gorgon sees fans of Obsidian’s satirical sci-fi romp indulged with a handful of brand new areas to explore in a ten-hour adventure that fills in some interesting lore with regards to the game’s marauder enemies whilst also providing an atmospheric and engaging noir-style detective mystery to get stuck into.

First things first though, if you’re planning on grabbing Peril on Gorgon you’re gonna need to make sure you’ve played up to and completed the main game’s Radio Free Monarch story quest, which is roughly four or five hours into The Outer Worlds’ core campaign. However, further to this, and something that hasn’t been made in any way clear in the run-up to release, you’ll also need to ensure your squad are ranked up to at least level 20 before landing on the great green asteroid if you don’t want to get yourself one-shotted into oblivion by the first bad guy you happen across upon leaving the confines of your ship. To make matters even more convoluted, if you’ve actually already beaten the game or are right at the end – past a certain point of no return towards the finale of the campaign – you’ll also need to either load an earlier save or, heaven forbid, restart the game entirely as you can’t access this new DLC content from this late stage of proceedings. 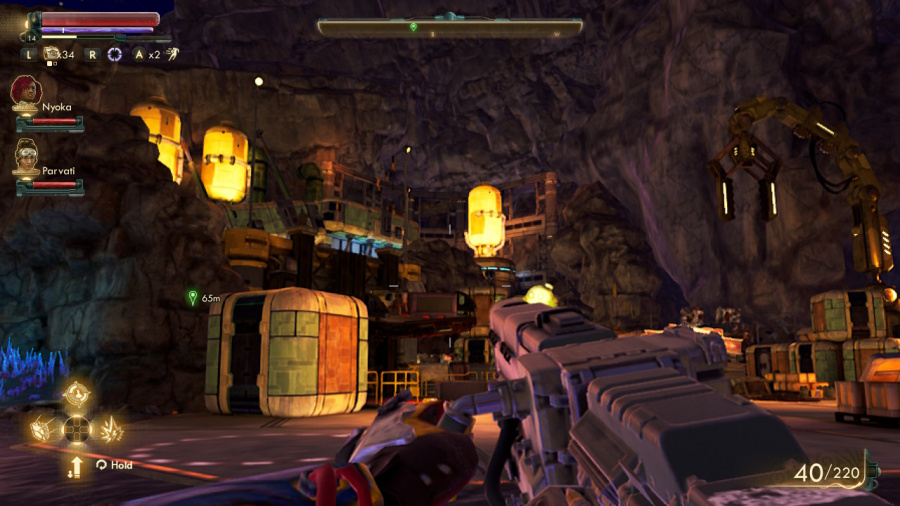 With all of that out of the way, Peril on Gorgon kicks off with a surprise mid-flight delivery to the Unreliable that sees you come face to face with a severed hand holding a cryptic clue that leads you and your crew to Gorgon’s Ambrose Manor and its wealthy recluse owner, Minnie Ambrose, who tasks you with finding her deceased mother’s research notes in the ramshackle scientific facilities that dot the now abandoned outpost. What follows is a genuinely intriguing detective romp that investigates, amongst other things, inhumane experiments carried out by Spacer’s Choice in their attempts to create and perfect the Adrena Time drug that you’ve been happily stabbing yourself with throughout the game’s main campaign.

Gorgon itself is a reasonably sized new area to explore – although perhaps not the most engaging from an aesthetic point of view – that’s absolutely jam-packed full of enemies and wildlife to battle with and copious notes and all-new audio logs to mull over as you work towards solving the mystery at the heart of this fresh slice of narrative. As well as taking place on this all-new planet, Peril on Gorgon also cleverly works to avoid growing stale by having your crew jump around a handful of other new locations, which we won’t spoil here, as well as opening up some previously locked areas in places you’ll have already visited on your interstellar adventures. 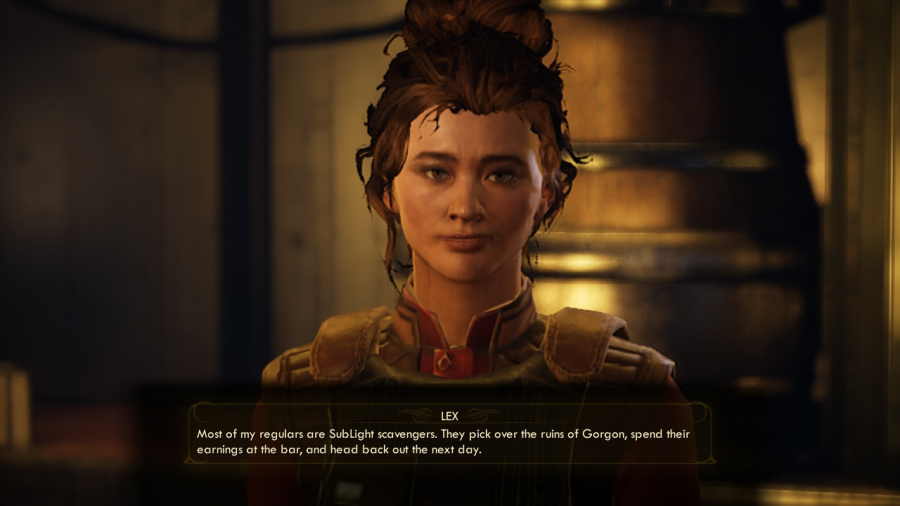 Alongside these areas, and a host of well-written new characters to get acquainted with (we love you, Clarence Mostly) there’s also a couple of fun new science weapons to get to grips with, armour and perks to get your hands on and a level cap raise to 33 which also introduces a Virtuoso bonus ranking to all previously existing skills. Tweaks have also, less successfully, been made to skill checks, upping the highest level of locks from 100 to 150, meaning you’ll have to work harder to open sealed off areas and chests, a change-up that feels a tad unbalanced and makes something that you rarely thought about previously feel like a bit of an unnecessary chore.

This small issue aside, however, Peril on Gorgon is really just more of the same great Outer Worlds that we already know and love, a sharply-written and consistently entertaining excuse to return to a game that we’re more than happy to re-engage with. It really does feel great to get back into action with our old squadmates – especially the kickass duo of Parvati and Nyoka – and it’s good to see that each and every one of the old crew here has had lots of new incidental dialogue recorded for this fresh set of quests.

One criticism that we noticed repeatedly levelled at The Outer Worlds when it originally released was that it was surprisingly short all things told and, in this regard, Peril on Gorgon really does feel like it helps beef-up the game’s slightly slender central narrative. It’s been considerately woven into the fabric of the existing adventure too, with its events even referred to in the main campaign’s retouched closing moments, making it feel much more like a properly embedded part of the core experience rather than a throwaway, disconnected storyline. There are also multiple endings to this slice of DLC that gives it a decent amount of replayability, a good thing since it’s certainly easy to miss out on plenty of secrets first time around here. 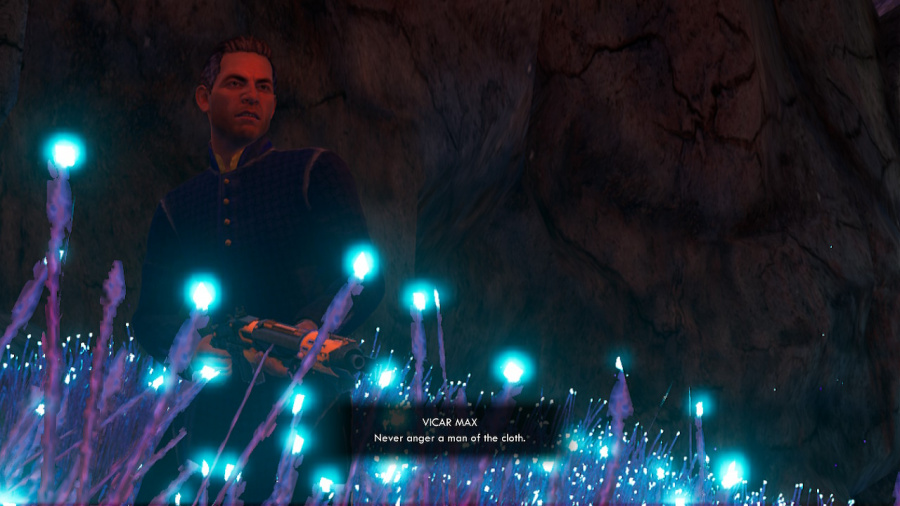 Of course, with regards to this Switch port of Obsidian’s sci-fi RPG, there are nagging technical issues and drawbacks that also need to be re-addressed here. When the game initially released on Nintendo’s hybrid console there were a handful of bugs – most notably a streaming issue that saw some unexpected loading occur as you ran around open areas – that held the experience back, as well as an overall level of blurriness to the game’s visuals, especially in handheld mode, that inevitably put some players off.

Thankfully, Private Division has been hard at work in the meantime and, after patches 1.2 and 1.3, this is an experience that’s had its most serious bugs thoroughly squashed, now looking noticeably crisper and cleaner and playing much more smoothly than it did back in June of 2020. Indeed, during our extended time spent with Peril on Gorgon, and in replaying through enough of the core campaign to initially access the new DLC, we didn’t experience any of the old random loading issues or bugs and the game, especially in handheld mode, is much easier on the eye overall.

There are still some framerate drops here and there, the action occasionally dropping down to around 25fps during intense firefights, but overall this is a port that’s improved considerably over the past eight or so months. You’ll still need to measure your expectations, especially with regards to visuals here which are more in line with Fallout New Vegas on PS3 than they are other versions of this game on more powerful consoles, but, in terms of gameplay, things are absolutely much more playable and enjoyable in both docked and handheld modes as things now stand. 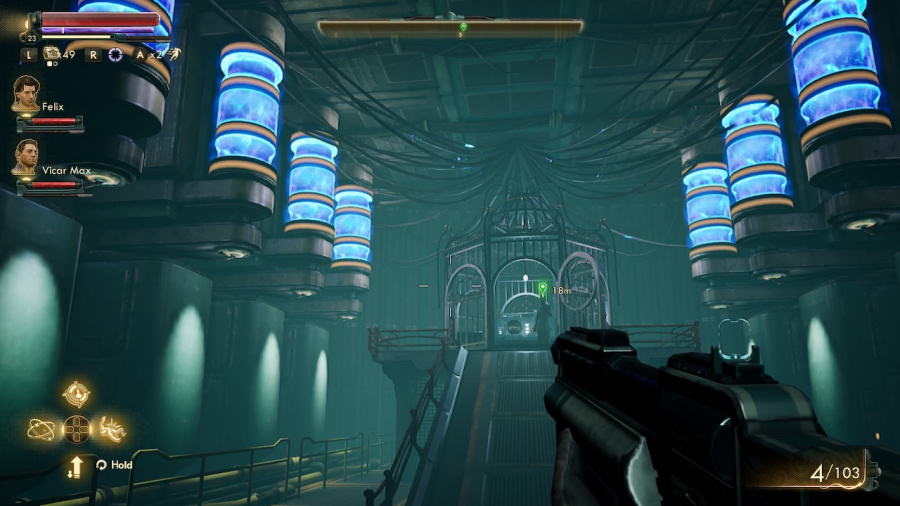 Overall then, Peril on Gorgon is a solid expansion to a cracking sci-fi RPG that might not do anything particularly new but does manage to succeed in providing plenty of interesting new lore and background whilst whisking players off to a handful of new locales on a genuinely intriguing noir-style detective mystery. With a base game that’s been patched into a much more playable state, there’s really never been a better time to jump into The Outer Worlds on Switch.

Perils on Gorgon is a well-written and highly enjoyable expansion to The Outer Worlds that provides lots of interesting new background info and lore whilst whisking players off on an engaging eight to ten-hour long sci-fi mystery. There’s nothing new here in terms of mechanics, no great big surprises or new gameplay additions, but it sure does feel great to get back together with the crew of the Unreliable in a Switch port of Obsidian’s sci-fi RPG that’s been patched into a much more playable state in the months since it initially released.

Pokemon Unite beta test coming to Android next month, but only in Canada