The natural pairing for a photography-focused game like New Pokemon Snap is a device to let you bring your in-game photos into the real world – so I wasn’t actually enormously surprised when Nintendo announced it’d be partnering with Fujifilm to allow images taken on the Switch to be printed via their Instax Mini printers.

In fact, seeing exactly what Nintendo had gone for, I was relieved. Nintendo is the king of the one-off accessory – a brilliant add-on that’s used for a handful of games but then basically worthless. This was the case for the Game Boy Printer, which paired brilliantly with that device’s camera and a smattering of other games, but was otherwise a dust-collector. By partnering with Instax, the company has smartly tied in with an existing, multi-utility device.

If you’re unfamiliar, the Instax Mini Link is basically a little photo printer that syncs up to your smartphone. It can split out a decent-quality photo in a Polaroid-style ‘instant develop’ format in a matter of seconds. The photos are small, at 2.4 inches by 1.8 inches in size, but there’s a novelty to these instant prints that has made these devices a bit of a force in the market.

Rather than ink, these photos develop in a similar way to those older instant photos too – which means you just slot in little sealed packs that allow you to print ten images, then eject and replace once that ten is depleted. The main disadvantage is that it can get expensive, and also that the printed photo color definition isn’t always fantastic – but it’s nevertheless a neat little device.

I’ve had experience with the Instax brand before – my partner has an Instax Mini camera – the same technology, but all-in-one, no phone required. Point and shoot. The Mini Link has a slightly different tack, with editing tools built into the accompanying phone app so you can touch up and format photos, add text or other extras, and then print them.

Basically, you can Instagram-up your photos, but then print them in a cute retro format, giving physical photos you can pin up or slide into albums – if people even still have photo albums any more. It seems like the perfect sort of thing for a teenager who wants to decorate their room with photos of good times with their friends… if that’s still a thing teenagers do.

Anyway, the printer is quite simple. It has one button to turn it on and off, and some superfluous motion control features – so you can tilt it, shake it, and flip it to control various functions without picking up your phone. None of these actually factor into the Switch implementation, though. 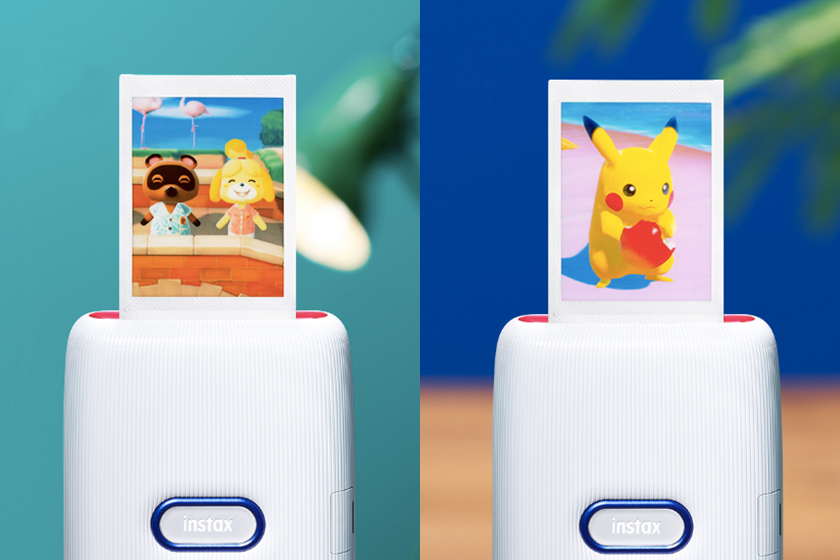 For Switch, Nintendo and Fujifilm have put out a separate app, “Instax Mini Link for Switch”, which is available now on both iOS and Android. This has the same functionality as the existing Instax Mini App, so you won’t miss any features, but it bundles in the ability to port photos over from your Switch as well as some Nintendo-themed photo frames and the like featuring Mario, Pokemon, and Animal Crossing.

The process of transferring a photo from Switch to the printer is a little cumbersome, but it’s understandable given the nature of the printer. It’s also not just limited to Pokemon Snap – any Switch screenshot can be imported to print.

Basically, it’s a multi-step process. First, the printer has to be turned on and synced to your phone. Sync it once and it’ll automatically reconnect over bluetooth whenever the printer is turned on. Then, kick off the Instax App. Meanwhile, on your Switch open the screenshots application and bring up the share options. In here, there’s an option to “Send to Smart Device”, which is what you use on your screenshots of choice. 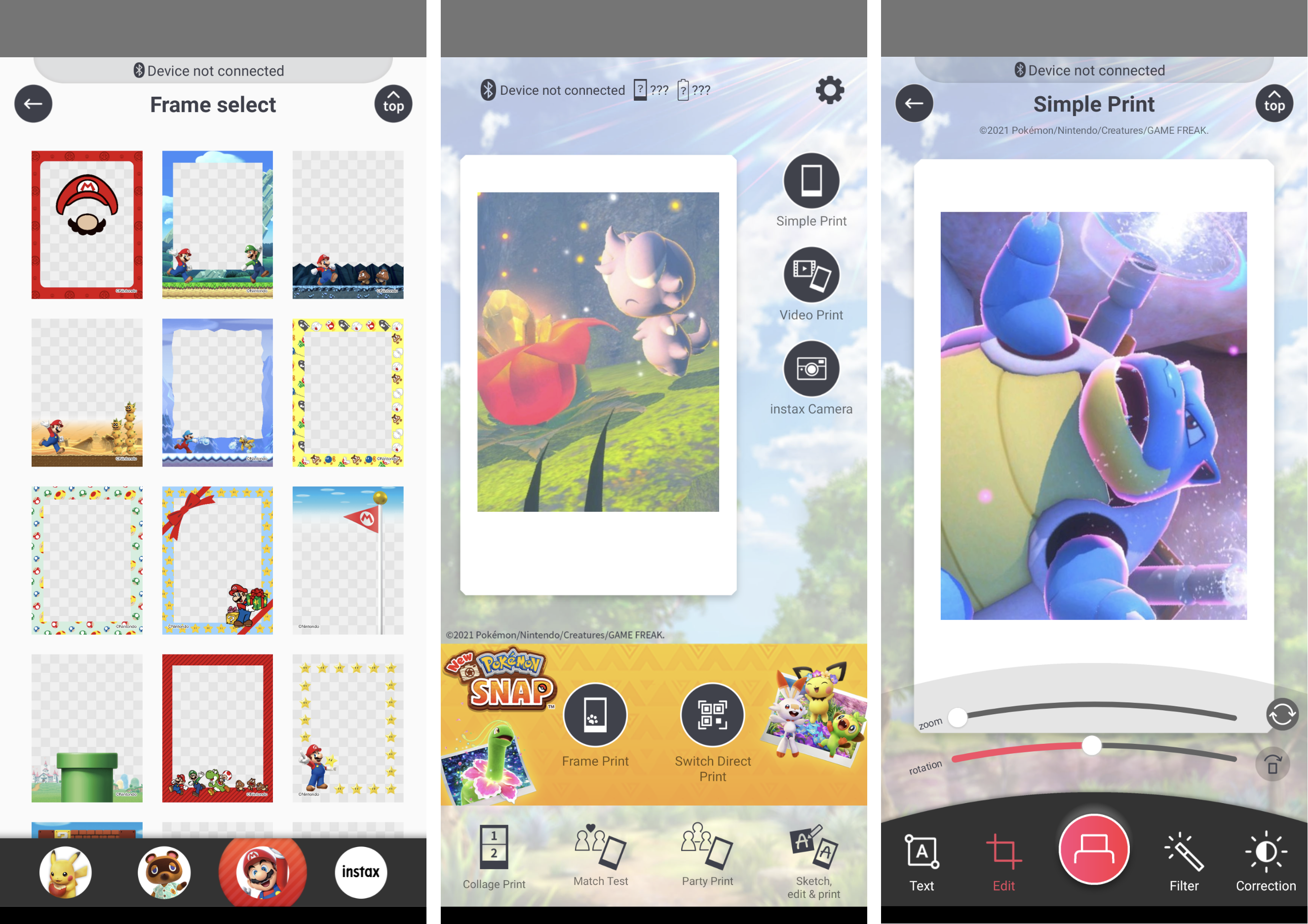 You can send one or multiple images over to your phone this way at once. Hitting it brings up two QR codes; one to let your device connect to your Switch temporarily for the transfer, and one to confirm the transfer. Within the Instax app you scan these QR codes… and a few moments later, you’ll have your screenshots on your phone.

From there, you can use the same framing and editing tools as with regular photos – and then send it to the Instax Mini Link to print. The app remembers past photos even after you’ve loaded new ones, so you can reprint favourites multiple times easily – though the film is expensive, so perhaps not too many times!

The whole process is fiddly the first time, but a breeze thereafter – and it is fun to see your in-game photos come out into the real world, just as it was all those years ago with pixelated, augmented Game Boy Camera snaps.

The whole thing is a bit of a gimmick, obviously. But it’s also fun, and the fact that this is a functional little instant photo printer in its own right makes it superior to Nintendo’s Game Boy attempt. That was pure gimmick – which was fine, as back then it was impressive. But photo printing is easy now – and nobody would pay significant money for a photo printer that only worked with the Switch.

Fortnite’s Daybreak sounds a lot like a PvE mode

Niantic outlines what to expect during Pokemon Go Fest 2021

Where to pre-order Pokemon Legends: Arceus

Pokemon Legends: Arceus will be released for Switch in January

Resident Evil Re:Verse will be released in July