Everything was fine till I spotted the gun turret. I fancied my chances against the Stretch limo hurtling towards me with a spray of well-placed 39mm bullets, but the unexpected mount posed a new threat. I took a deep breath and prepared for war – that is, before an armoured Gallivanter Baller battered my aggressor at full speed, flipping him three times over with a crunch of metal and broken glass. And then a Valkyrie MOD.0 fell from the sky like a fiery comet.

With the arrival of Grand Theft Auto Online’s Executives and Other Criminals update in December 2015, so too came a new level of carnage. Los Santos was hardly a quiet getaway before then, but this slice of inventory-boosting DLC stepped up the crime sim’s chaos exponentially with a slew of new weapons and battle-ready vehicles. It was also the first time I experienced the FOMO mania that drives the game today.

The recently deceased in the above scenario had barely respawned before I’d purchased an armoured Baller, for what better endorsement of its durability than to survive a helicopter crash at ground level? You may as well throw in the chopper and the gun turret-toting limousine while you’re at it. Because if I can see, then I want it. And that’s one of GTA Online’s most important and enduring features.

Customisation in sandbox PvP games is nothing new, but through years of tweaks and tinkering, Rockstar has near perfected the game’s shop window appeal, where you pine for new items in practice – often as they career towards and/or kill you at break-neck speed – and revel in the unscripted, circumstantial set-pieces that unfold thereafter.

Maybe your own armoured Baller moment involved a run-in with a missile-launching Deluxo, when the DeLorean-aping whip rolled out in late 2017. Perhaps it starred a twin-shooting Oppressor mk2, when the Looper-like hover bike first dropped in 2018. Or maybe it occurred more recently, when a green alien onesie-wearing loon whacked you upside the head with the thick end of a baseball bat.

GTA Online’s ongoing alien gang war is the game at its best. What started as a modest contingent of bothersome Green Martian Bodysuit-wearers terrorising others with Louisville sluggers, has in the last few weeks exploded into a mass-server conflict between millions of players that’s totally consumed pockets of Instagram and TikTok along the way.

A competing Purple Martian Bodysuit-sporting faction now exists to police the greens, and it’s suddenly harder to find servers not overrun with folk head-to-toe in one colour or the other. RIP to those of you who’ve stumbled into the wrong room wearing the wrong colours, or even worse, no colours at all. 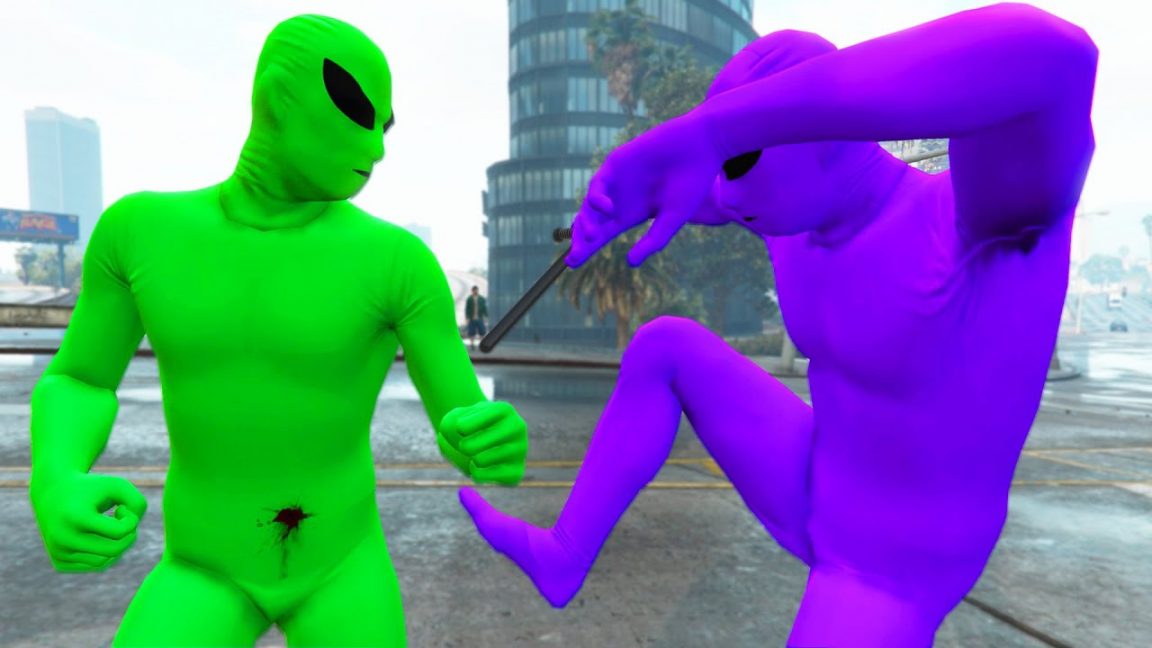 GTA Online’s official expansions are great, but what makes its player-led alien warfare so entertaining is its ad-libbed and unpredictable nature. These seemingly innocuous uniforms exist alongside reams of virtual garments, a growing digital wardrobe almost a decade in the making, yet have spawned a viral subculture, driven entirely by its players almost overnight. Picking sides (I’m purple till I die, by the way, which has evidently been often) and duking it out in-costume is up there with some the most fun I’ve ever had in vanilla GTA Online, and the en masse free-for-all is the quintessential example of its “I want that” culture.

Almost seven years since its console release, over five on PC, the current obsession underscores GTA’s impressive breadth when it spreads its wings. Grand Theft Auto 6 might be some ways away, but the ground covered in the last decade by way of real-world superstar DJ cameos, exclusive in-game music, genuinely entertaining radio stations, and gilt-edged added content and DLC has paved the way for something bigger, bolder and even more balls out the bath whenever it’s ready. 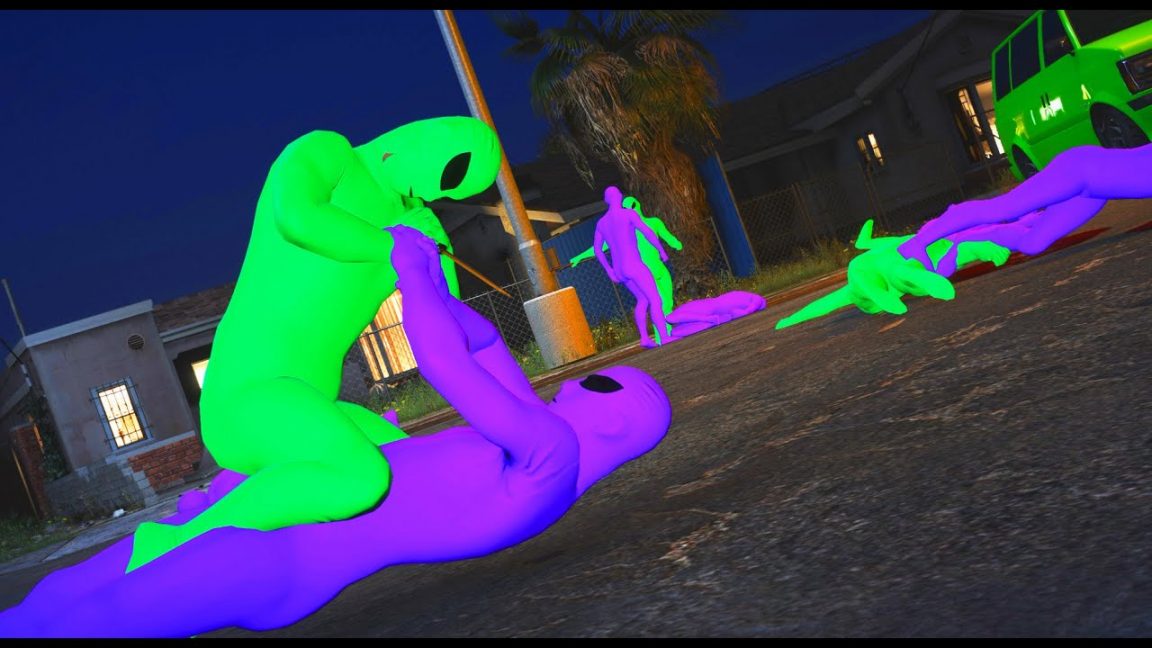 You’d have to assume Rockstar is watching the alien spectacle closely, and you’d have to suspect it already devised something to prolong its popularity, in-line with the developer’s penchant for subtle homegrown conspiracy and longform teases. I hope it does, and I’m certain the current craze, coupled with the ever-growing popularity of the game’s unofficial roleplay scene, will be carried forward into the next online slice of Grand Theft – be that in Vice City or wherever it takes us.

Fortnite’s seemingly unstoppable growth is a good yardstick for all of this, particularly its recent in-game Travis Scott-starring Astronomical event. The American rapper’s live concert was a breath-taking endeavour that saw a towering over-sized Cactus Jack spitting the likes of Sicko Mode, Highest in the Room, and Stargazing, while rocking his signature mocha/white Jordan 1s, reverse swoosh and all, as clusters of players gathered at his feet, or flew around the portion of the map dedicated to the show, dabbing their way from one hit to the next.

According to developer Epic Games, 12.3 million people tuned in simultaneously for the premiere, and, after five in-game shows, digital Travis accrued 27.7 million unique viewers and 45.8 million views all told, taking into account players who watched the gig more than once. Which is nothing short of remarkable.

GTA is of course its own beast, but it’s also the only existing series capable of challenging or reflecting undertakings of this scale in its own playground. Imagine what a Grand Theft Auto 6-flavoured take on Astronomical might look like – with Rockstar’s far reaching multi-million-dollar licensing deals, and the series’ gorgeous pseudo slants on real-world USA, not to mention their scope for stable 300+ player-supporting online servers. Moreover, Fortnite is a game in-part marketed at children – Mr Scott’s often choice lyrics are bleeped out above – which gives GTA even more leeway to go bigger and louder.

Fortnite’s Travis Scott event was a progression of last year’s less elaborate Marshmellow gig, but with the likes of Frank Ocean, Solomon, Tale of Us, the Black Madonna, A$AP Rocky, and others having offered exclusive in-game tunes, music videos and entire albums over the years, what’s to stop GTA 6 hosting its own music festival in the mould of Coachella? I envision special in-game events in the lead up to these limited-time affairs that let players grab tickets – an idea which might extend to sporting events and huge-scale comedy shows, with Curb Your Enthusiasm and Chakra Attack’s JB Smoove up there on stage, alongside the returning Ricky Gervais and Frankie Boyle a la Grand Theft Auto 4. If players sleep on tickets, perhaps entry invites intuition, with systems in place to allow the most cunning of players to exploit the rules. Oh man, I can totally see myself roleplaying as Homer Simpson and his pals, mirroring that time they snuck into the Super Bowl. 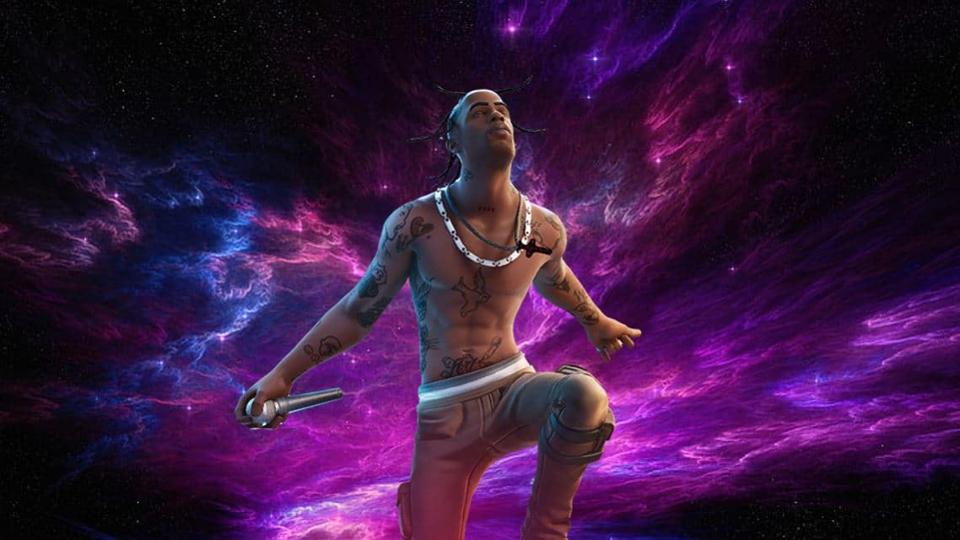 Grand Theft Auto Online’s After Hours nightclub update of 2018 was one of its most ambitious, but, like the Diamond Casino update of last year, it’s hamstrung by its run-of-the-mill business venture-meets-cash generator core which lingers under its flashy DJs and spinning glitterballs veneer. It’s taken the recent inadvertent furore to recapture the incidental brilliance upon which the game was built, and I’d love to see it formalised in future, combining the push and pull mechanics of GTA: San Andreas’ wonderful turf wars system with the shrewd item placement we’re seeing today. Perhaps specific gang uniforms would act as wearable visas within annexed maps, whereby Hitman-levels of deception topple crime lords and grant new successors.

Doing all of that and folding in a functioning economy would make every action and reaction count for double. Whereas numbers-heavy simulations like EVE Online have long employed functioning in-game economies, Animal Crossing New Horizons has shown those systems can easily translate to mainstream open-world games. Back when GTA 5 first hit our consoles, who could have foreseen the Financial Times running commentary on the marketplace and stock markets of digital anthropomorphic animals?

In Grand Theft Auto 6, however far off it may be, maybe we’ll get all of this or something similar. Maybe we won’t. I hope we do, and I’d suggest there’s so much to be learned from the ongoing alien war and mass-scale events like Travis Scott’s Astronomical, which truly did live up to its hype.

In the meantime, no matter what happens, fuck those green bastards. I’m purple through and through. Purple till I die. And die. And die once more.

The 14 Animal Crossing: New Horizons villagers I’d most like to self-isolate with

GTA 5, MLB The Show 21, and more coming to Xbox Game Pass this month

GTA Online player claims to have figured out why the game loads so slow, offers fix