It’s particularly affecting to play a game like When The Past Was Around as the most devastating year of many of our lives comes to its chaotic close. A lot of us have experienced personal loss in 2020, which makes this game’s tasteful, cleverly-constructed exploration of the subject both welcome and, dare we say it, a little bit necessary.

Taking the form of a point-and-click puzzler, each scene reminded us of “escape room” titles and adjacent games such as the Room series, though here you’ve got more familiar domestic environments instead of Lament Configuration-style puzzle boxes. You’ll be presented with an area, and must explore it thoroughly and solve its puzzles to find a way forward. It’s not entirely dissimilar to a hidden object game, in fact, but everything’s tied together very nicely in a way that removes the abstract, arbitary feeling you sometimes get from that genre.

In a sense, it’s a pretty straightforward tale of grief and loss, but the presentation is dreamy and a little vague, but in a way that’s open to interpretation rather than just lacking and lazy. Ostensibly you’re controlling the destiny, so to speak, of a nameless young woman who seems to have lost the love of her life, though there’s enough in the music and in-game musical paraphernalia to suggest that she’s lost more than just a lover and is in search of a muse. Or both. Or neither. It’s really up to you. 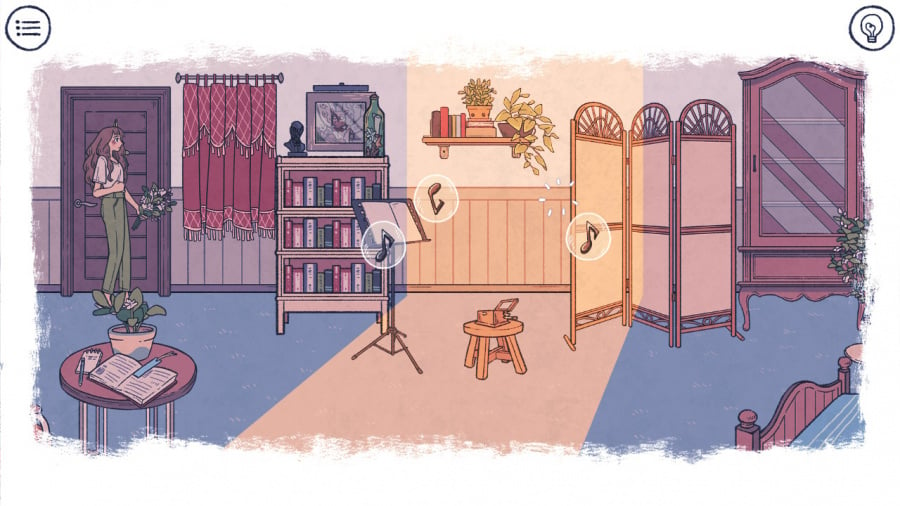 Themes of losing your own way after a traumatic experience manifest in ways that are so simple and obvious that it’s kind of brilliant; you’ll find yourself rifling through boxes of keepsakes, old clothes, piecing together a home in disarray. Remind you of anything? As the grief mounts up, so does the desperation, and the nature and content of the puzzles shifts and morphs to account for the frenzy of emotion in ways that are too interesting to spoil, especially given how brief When The Past Was Around is.

That’s no criticism, incidentally. The game’s developers have been up-front about its length, listed as a rough “two hours”, though it didn’t quite take us that long to finish. It’s even breezier for how gorgeous it all is, and your main drive to see more (outside of the fact that it’s, well, very good) is the fantastic art. It makes terrific use of beautiful autumnal colours and the stylised imagery avoids being twee or esoteric for the sake of it.

The puzzle element is no slacker either, though it’s never egregiously difficult. You can play with the analogue stick but we preferred the spot-on touch controls. You can hit a button to show all the “hot spots” at any time, reminiscent again of point-and-clicks, removing any trace of interface frustration. This lets you apply yourself to the puzzles and developing narrative without the UI ever getting in the way, or any need for tiresome “pixel hunt” action. That said, while we recommend the touch controls over the traditional ones we still found it fairly easy to accidentally tap the wrong place on the screen. Then again, maybe this writer just has a really fat finger. 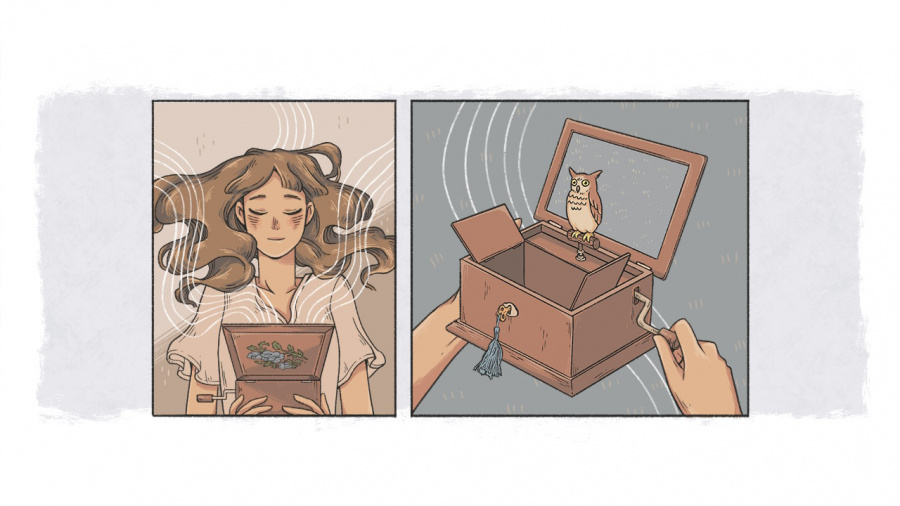 It’s beautiful to look at and listen to, with attractive graphics that recall illustrations from a beloved children’s book, and an excellent, evocative soundtrack from ittou. As mentioned, music weaves its way into the narrative so this was a crucial part of the proceedings – thankfully it absolutely lives up to the material, delivering a memorable and moving backing to what emerges as a memorable and moving video game.

Linearity is often an issue in narrative games and that’s the case here to some extent, but while the structure is rigid, there’s plenty of scope for discussion, analysis and good old arguing about what it all means, what everything represents. Why an owl? Does he represent performance? Was that sound diagetic or non-diagetic? These are some of the questions raised, but there are no easy answers. Nor should there be. Death isn’t easy. Finding space, order in the face of the random cosmic cruelty of existence. Compartmentalising your memories, and what that means, and how that’s represented here. Big subjects to tackle, and When The Past Was Around meets them gracefully and unpretentiously.

Concise, carefully crafted and beautifully malleable in its meaning, When The Past Was Around is a rather gorgeous little art game that remembers it needs to be interesting in its puzzles as well as its narrative. Taking the principles of escape room-style gameplay and fitting them around its theme lends them a gravitas that belies their simplicity and elevates this game into more than just the indie flavour of the month. Sure, you’re not likely to play it twice, but you’d be hard-pressed to forget about it. And, honestly, after this year? We needed it.